The Magic of Being There. Pt.2.

[Cont. from Part 1, where a young, handsome limo driver in New York is on the phone with his manager because he has been invited to a private apartment to audition for a leading role in an Off-Broadway revival concert of a cult hit musical. The manager replies...]

Tom Rhoads answered with the address.

His manager replied, "You don't mean Jim and Steve?"

It was Bob Callely, who used to run the American Theatre Wing, which hands out the Tonys. He was just in our home a couple of months ago, escorting Angela Lansbury when she showed up to see Bob Osborne.

Bob Callely was a HUGE fan of the original Off-Broadway production of TLS 12 years ago. He had even, at the time, invited Jim and me up to his office, and gave us both little Tonys -- key chains, "This is the only Tony I can give you now, but someday..."
Tom Rhoads worked for an agency where he was usually assigned as Angela's driver, but because of illness, she was off, so he was driving Richard Thomas.

Had Angela been on, we would have never met. (I didn't remember Tom. I was in the back seat with Richard, thinking, "How does a boy from Buna get picked up in a limo after a Broadway show by a childhood legend and end up driving to the most secret and exclusive club on restaurant row, which doesn't even have its name over the door, the Bar Centrale, where, inside, we saw Linda Lavin, Martha Plimpton, producer and entrepeneur Jim Caruso -- who once sang, in Dallas, my song "I Want To Make Music" -- Broadway columnist Michael Riedel, and all sorts of fancy looking people. When Jimmy later told me we were auditioning "the driver," all I could think of was, "What driver?")
The character of Buddy, for which Tom would be auditioning, is a special one. He's in his early 20s. Singer. A mama's boy. In fact, his "record label" is called "Emma Records," named for her. He's a devout Baptist, and he's made a name for himself in the Gospel market. 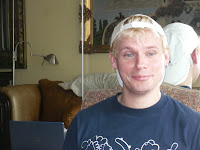 When Tom Rhoads arrived at our apartment, he was athletic, tall, with shaggy blonde hair pulled back under a backward baseball cap, huge blue eyes, and a winningly goofy smile.

I liked him immediately.

I probably told him I wasn't that impressed with his demo CD, which featured a bunch of "Broadway" sounding stuff, because I'm blunt and don't know when to just keep my mouth shut, but I wanted to know if he could sing pop and gospel.
"Oh!" He said excitedly. "I grew up Nazarene!"
He grew up Nazarene.

As if the John Boy/Murder She Wrote connection hadn't already put us in the Twilight Zone. The first song I ever had published was published by the Nazarenes. "I Will Trust The Lord," referred to in TLS. To this day, it's in their children sing-along books. I keep thinking that some day, one of them will discover my blog and banish it forever. 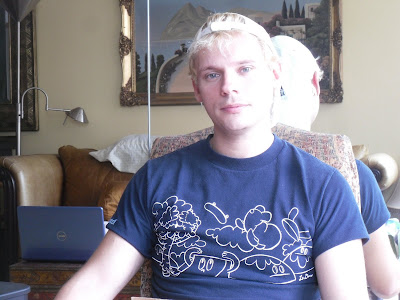 He added, beaming, "And I sing with my mama! And I won the Michigan Idol contest!"
Michigan Idol? Sings with his mother?
I wasn't auditioning Buddy. I was meeting Buddy.
"You sing with your mother?" I asked, feeling like I was quoting dialogue.

"All the time at home," he said proudly. "In fact, I brought her here to New York and we sang together for an event. Afterward, she was surrounded by all the gay boys. They loved her, and she loved them."

I probably laughed out loud.

But that demo. It was looming large in my mind.

Hesitantly, I sat at the piano and started playing and singing "Going It Alone" for him, so he could get a feel for it. After a couple of phrases, I started over and told him to echo me on the lines.


"Beside me every moment of the fight..."

But the real test is the bridge.

The song is written in an AABA format and the verses are pretty easy. It's the bridge, the B part, that's a bear because it goes very high and it has to be sung with the quietest and most delicate tone. Usually, "up" means "louder." You have to have a head voice, and it's the crucial moment of the audition. It's where most fail. Legit singers sometimes can't do it because they've been trained to not approach those notes that way.

But it's very natural for Gospel tenors.

So, hoping against hope, I sang the line, "Is it such a lonely battle..."

I felt him lean in. He echoed me. Perfectly. He was right in my ear. Our voices merged.

"Have I been so wrapped up in myself? What about what you've been through, as well?" A long, unbroken melodic line. He stumbled a bit because it's hard to get all in one listening. So, we did it again.

And that's when I heard it.

Somewhere, deep in there, I heard it. I can't describe it. Scott Coulter has it. Joel Traywick had it. Stephen Bienskie has it. Brian Childers. An ache. A touch of pain. I stopped him. I probably scared him.

"That! That's it! What you just did. That's the sound. That's the part of your voice I want to hear! That's Buddy!" It's the part of his voice that's totally and uniquely Tom. I looked over at him. Tears in his eyes. He said, "I don't even know this song and I'm already crying."

Tom was living this material. And feeling it and believing it, and he had a remarkably fine instrument to do it with.

We read a few scenes and I'm sure he was fine as an actor, but I don't remember that part. I leave that up to Jim. What I heard was The Sound. If he could do that on stage, if he worked his ass off and really learned this material, so that he could just sing it without thinking about it, he would slay everyone in the audience. 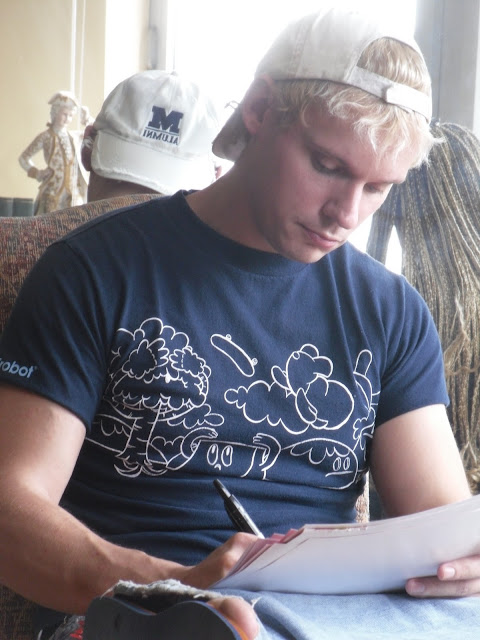 I'd audition him any day. ;-) Nice arms. He wasn't annoyed by all the paparazi Steve snapping photos? Wish I could have been there for the magic the night of the show. I'm so sorry I couldn't experience it first hand.

Jason, we'll do it again just for you. So, now get better!