What a pleasure it was to attend the Theatre World Awards, the warmest awards show in town.. We had tickets for the balcony, but we're too big to sit in most Broadway seats very comfortably, so Jim said, "Let's sneak into a box."

Normally, I hate box seats. I want to be out front. You hardly see the actors' faces in a box seat. So, like a scene from a Lucy Show, we crawled into the closest box seat to the stage. The Belasco Theater looked like this from our vantage point: 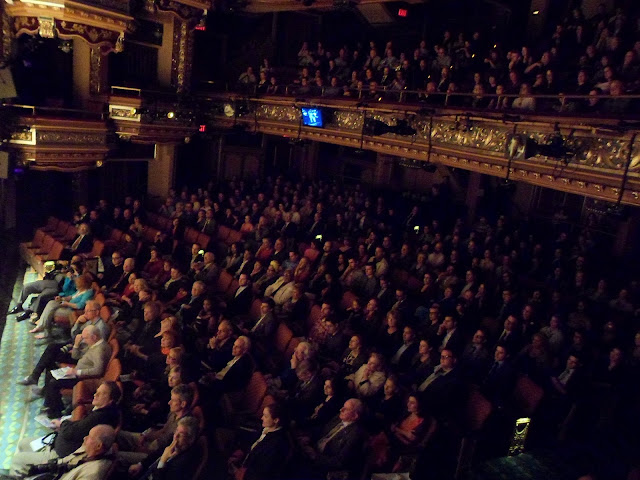 And then this was posted to Facebook:
I grabbed our camera and, turning off the flash, started taking pics of the stage, which, as you can see, was right below us.

Though we wore a coat and tie, these awards are not intended for the glamorous crowd. It's a very particular award and you can only get it once because it's awarded for the most outstanding Broadway and Off-Broadway debuts of the year. There are no nominations and no stress. They choose six men and six women given to them by either a castmate or someone associated with the recipient.

Meaning, the stories were all personal and intimate. The acceptance speeches, short and also personal.


The awards were started 68 years ago by John Willis, who published the essential annual volume, "Theatre World," which contains listings and photos from all the shows in a particular year. Several of the speakers said how they, living as a child in Virginia or the  midwest, would read and collect these like a Bible. One said, "I knew the names of every assistant stage manager of the smallest Off-Broadway shows."

Unlike the flashier Tonys, this is the most "family" feeling awards show in town. I'm so glad we were able to go.

Sorry, I've not been here for a while. Jim is looking good!