Jimmy the Juiceboy Plays the Palace.

Last Tuesday, I cried on the bus all the way to the foot doctor. Luckily, it was cold and rainy, so I didn’t stand out, not that I would have cared.


I wasn’t sad. I was reliving a work of art, a ballet for two men that I had seen the night before at Broadway Backwards, a benefit for Broadway Cares/Equity Fights AIDS at the historic Palace Theater. Called “Vespers,” it was danced to the music of the Tom Waits’ song, “Tom Traubert’s Blues,” which is one of my most favorite songs/recordings of all time.

On the bus, I kept hearing the song in my head, getting the verses all tangled up, living inside the song, Picasso style, and all the while remembering the dance, and crying at the dance. It was a man trying to bring his dead lover back to life. But the dead lover is like a puppet with no strings, so his agony increases.

And all the while, Tom Waits is singing in this mournful voice, a string orchestra behind him.

Even now, as I recall the scene, I’m driven to tears. The need, the urge, to bring someone you lost back to life. And it almost works. You catch a glimpse of their smile. Almost hear their voice. Remember their eyes. You think of something they’d do. But, ultimately, they slip away. They don’t come back to life.

Jimmy was playing the Palace. Jimmy the Juice Boy. That’s what Cyrill Ritchard called him during the time Cyrill played "Sir" in "Roar of the Greasepaint" on Broadway and Jim was selling orange drink in the back of the theater.

“And even better,” he said, “I’m playing the Davey Burns part.” That’s the “character man” role where you go in, get the laugh, steal the show and exit.

Longtime friends, Tony played an activist who lost his lover, “Arthur” to AIDS. Jim played the friend who loves him. Tony and Jim were so good together. When I told someone that they end up together, they asked if I was jealous. I said, “It’s acting!”

Mostly, though, it was a night of laughs and great fun. And great Broadway stars singing (and sometimes tap dancing; Karen Ziemba doing “Go Home To Bonnie Jean” in a lesbian bar: priceless) to songs they’d, otherwise, never get to sing or perform, especially to a full orchestra and a stage full of other dancers.

Or Tituss Burgess tearing the house down with "I'm Telling You I'm Not Going" from Dreamgirls.

There was this magical moment that happened, too. We had been inside the Palace Theater all day long for the tech of the show, not knowing what it was like outside.

So, just before curtain, as the audience was filing in, I went into the lobby and looked out through the glass doors. A sudden snowstorm had hit and it felt magical to see the huge snowflakes lit by the lights of Times Square. 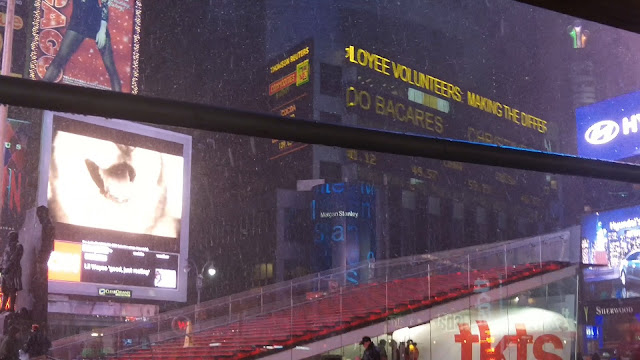 After the show, one our friends, in the glittering lobby, asked if I’d seen the dressing rooms and were they glamorous?  I hated to break her heart, but it’s New York. Jim and Tony were sharing Anthony Warlow’s dressing room. He is currently playing Daddy Warbucks in a revival of Annie. I was on a small couch, sitting up but resting after the long day, when suddenly, CLANG! BANG KLANKBANG! The ancient steam pipers. Sounded like gangsters were coming up the steps. And the layers of paint are so thick on the bathroom door, it won’t close all the way.

I love these old places.

I had gone out onto the darkened stage, late afternoon, after everyone had been dismissed, before the show, and looked up at the levels of seating. 1700 people crowded in on you, looking at you. A focal point so perfect, it takes your breath away.

For a performer, it’s elixir.

The lights were mostly off, but I could see the balconies.

Remembering the amphitheatre in Ephesus, I I planted my feet and sang a note.

And then sang another. I sang at the Palace! Just as I finished, a woman’s voice spoke. She was the conductor/musical director. I introduced myself and told her how much I admired conductors. I get so caught up when I sing, that I sometimes can’t even remember what I’m supposed to be playing on the piano.

Full orchestra. Lighting. Sound for an enormous number of people coming and going. Choreography. A company of singers and dancers called The Broadway Backwards Ensemble, who were awesome and beautiful, including my “teacher’s pet” rival at church, Danielle Erin Rhodes.

They also used The sets from “Annie.”

During the day, everything was rehearsed out of order, like shooting a film out of order, and none of us knew how it would play that night until it did. And because Jim and Tony had a throughline, it made it difficult for them to remember which scene was in what order, which is important because those are the words you’re gonna be saying.

That night, during the show, I was sitting next to another great character actor, Richard Bell. Dicky. One of Jim’s oldest friends.

Two seats over from me sat Marge Champion. At 94, the smartest and most wise cracking of us all. Marge and Gower Champion were the dancing couple of the 40s and 50s. Gower became one of the great Broadway directors. Marge is a legend in this town. Runs around town like a teenager.

She had on a velvet black hat with one jewel. Like royalty.

I wrote Bob Bartley a note afterward and said, “You’ve just written, directed and choreographed the best Broadway show of the season.” Because he had.

Hey, I played the Palace too!