17 years ago they said I had one year to live.

17 years in the bonus round.

I have rehearsal today at St. Clement's with Stephen Bienskie, who, in my estimation, is one of the most talented actor singers working today. He was in the original cast of THE LAST SESSION. It's hard to believe it's really happening, that we are getting together after all these years.

Yesterday, I met with Michele Mais. She had indicated last month that she wasn't sure she would remember the songs completely. She seemed almost apologetic. But, it's been at least 10 years. She needn't have worried. Without even referencing the sheet music, she remembered almost every word and note.

So did Amy Coleman yesterday.

Maisey and I talked about the exciting time she's having in the hit Broadway musical, Rock of Ages. Jim and I saw the show back when it was in Los Angeles, when they were just beginning to see if audiences would respond to a big, dopey, fun, jukebox musical featuring all the big-hair, stretch pant rock songs from the 80s that most of us cringe at now. Songs by Slayer and Journey and a dozen others.

Jeramy, our ASA, said he and his friends loved it because it was their childhood music. They all went out and got pleasantly drunk, and then treated the show like a rock concert, which it kind of is. (I think you can drink beer at your seat, in fact).

"Rock of Ages," in a way, is like a special episode of American Idol, where they might take all the singers from that season and give them a plot. It even, now, have Constantine Maroulis in it, who was a contestant. I understand he's very good in the part.

"But, Steve," she said, looking right into my eyes as we sat together at the piano, which is situated behind the set of Zero Hour, "The Last Session will always be my favorite musical."

I beamed. It'll always be mine, too.

We were between shows this day, the matinees having just let out. Jim was sleeping downstairs in the dressing room.

She continued, "And I've been in thousands of shows. Great shows."

Maisey looks as young and vibrant today as she did 10 years ago when she breezed into the Los Angeles auditions, long braided hair flying. At the time, I described it as something like the sun rising. She radiates light, and I'm not saying that in a spooky religious way. It's visceral. And it hasn't changed. 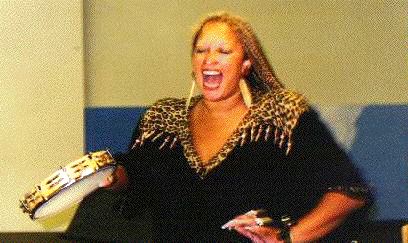 One of the first pictures I ever took of Maisey.
Our two shows are only a few blocks apart.

Jim and I have a routine each night before his show. We go to the Polish Tea Room (Cafe Edison) on 47th street for a bowl of matzo ball soup, then exit, walk past Rock of Ages, hoping to run into Maisey, turn south on 8th avenue to 46th street and then walk over two blocks to St. Clement's, which is between 9th and 10th. By then, Don and Jeramy are usually there.

I had met with Amy Coleman the day before. She and her husband, David, are two of our favorite people. Amy, also, seems not to have aged. David... well. David has a gray beard and looks like Zero Mostel. His grin is infectious.

They run a studio over on the east side, which has a performance space/piano, etc.

Maisey remembered when we met. Laguna Playhouse. 1998. "And you with your video camera! I was like, what is this? But I'm so glad you caught it all."

I didn't turn on the camera today, just as I didn't turn it on when Amy was there. And it was laying right there on the piano.

No matter what anyone says, real life happens off-camera. I didn't want a performance. I wanted it to be the two of us.

However, I will be taping stuff as we go along. We have an all-day group rehearsal on Monday down at Amy's studio. That's gonna be a blast.

And, of course, we'll meet after Jim's show on Wednesday, the day of the concert.

Anyway, must get ready and get down to the theatre.