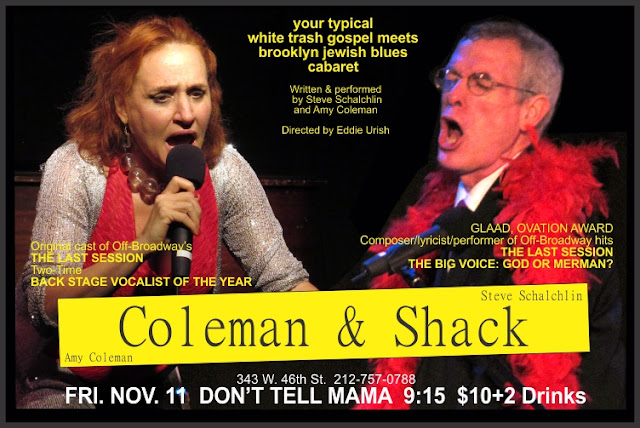 The duo will perform songs from all three of Schalchlin's scores plus a few new songs written by both Coleman and Shack. Steve Schalchlin and Amy Coleman have joined forces to become COLEMAN & SHACK, a new show which not only revisits the music they're know for, but compares and contrasts their personal stories.
A "country preacher's kid," Steve Schalchlin is a longtime AIDS survivor who has extensively documented his odyssey of survival. His pioneering blog Living in the Bonus Round was established in 1996. Intended to be a memoir of a dying man, it has instead become a testament to courage, perseverance and rebirth. Prior to blogging, Schalchlin wrote a series of songs that he now credits for saving his life. These songs provided the bedrock for his award-winning Off-Broadway musical The Last Session, in which he eventually starred after being brought back to life through means of a luck-of-the-draw lottery for a revitalizing new AIDS medication. Schalchlin's other works include the recent New World Waking, which debuted in 2008 at Davies Symphony Hall featuring the San Francisco Gay Men's Chorus, Women's Community Ochestra, with soloist Jennifer Holliday and actress Piper Laurie.
Amy Coleman has played the lead role of Vicki three times in The Last Session, and it was at that New York audition that she first met "Shack." They were later cast together in several productions. A Jewish girl from Brooklyn, Amy's very New York career was a mix of theater and rock bands, including the role of Janis Joplin in the original production of Beehive at the Village Gate. Schalchlin says, "In The Last Session, Amy tore the roof off every night when she performed ‘Somebody's Friend.' Since then, we kept up a long friendship, always vowing to someday just put a show together on our own. When I moved back to New York City from L.A. two years ago, it all became possible."
C. Todd White, author and cultural anthropologist (Pre-Gay L.A.: A Social History of the Movement for Homosexual Rights) says of GLAAD Media Award and PFLAG Oscar Wilde Award recipient, Steve Schalchlin, "He is a living testament to the healing power of music. He is a national hero, a true role model and inspiration for gay men from east coast to west."
There is a $10 music charge for COLEMAN & SHACK, with a two-drink minimum. For reservations, call (212) 757-0788 after 4 pm or visit donttellmama.com.