Jim and I both just received year-end recognition for our respective appearances at the Metropolitan Room this past year from Stephen Hanks writing in BroadwayWorld Stephen is one of the very few critics who takes the time to see just about every show in the City -- and believe me, it's a lot.


Best Use of Personal Photos/Multi-Media Presentation in a Show: In his absorbing tribute show, Character Man, Jim Brochu mixed in some wonderful snapshots of himself with many of the great actors to which he paid tribute.


Most Surprisingly Powerful Show That I Didn't Expect To Be So Good: Steve Schalchlin's highly-personal and emotionally enriching, Tales From the Bonus Round, was a 60th Birthday/CD release show that was a revelation at the Metropolitan Room in late October.

So this is a great time to remind you that our big show night is in a little over two weeks! (And all my starving artist friends and blog readers, the half-off discount code is stevejim. Enter it after you order your tickets on the website. But don't tell anyone. It's just a secret between us. 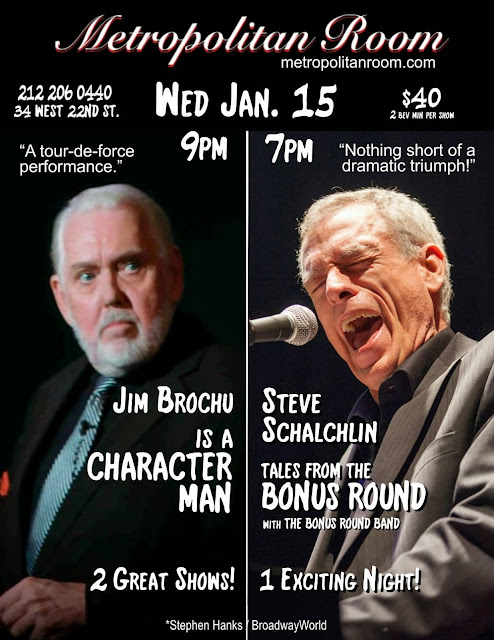