Today, we got to do something really special. A friend of ours from Ft. Lauderdale, Bobbe Schlesinger, who we met through Charlotte Rae, invited us to Beverly Hills for a "luncheon" with a bunch of her other friends. We had no idea who would be there, but if you like celebrities, at our table were some of my favorite people in the world. 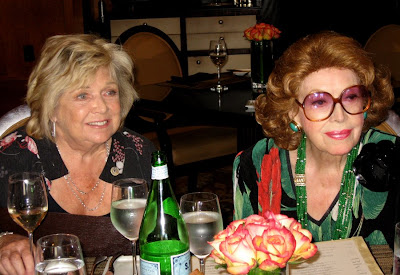 Patty Van Patten & Jayne Meadows.
Can you believe Jayne will be 90 this year? 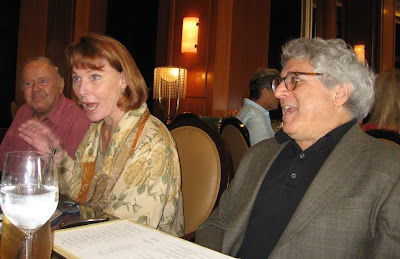 Dick Van Patten, Marriette Hartley, Jerry Sroka.
Jerry and Jim did a children's show together 40 years ago.
Dick and Marriette did a TV show together. 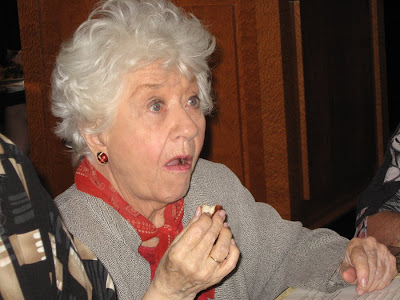 Charlotte Rae.
I caught her listening to a story. I love this pose. 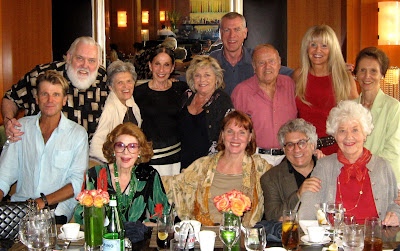 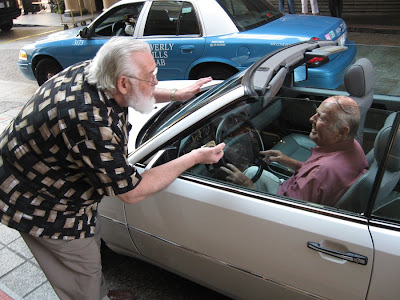 Jim Brochu pretending to be a parking attendant for Dick Van Patten.
Now, we'd met Marriette before when she and Jim gave out some awards together, but didn't really know her. Jerry, as I said, did a show with Jim 40 years ago at Playhouse on the Mall in Paramus, New Jersey. They hugged and laughed together, recalling the time when Jim's satin genie pants caught on fire when then were doing Aladdin. (500 kids all heard Jim scream, "Jesus Christ, my pants are on fire!").

(Side note: The general manager there was a guy named Bob Ludlum who kept telling everyone he wanted to be a writer. He's now Robert Ludlum, one of the most famous thriller writers in the world.)

The conversation was fun and lively with lots of theatre stories. Then, toward the end, Marriette mentioned that she was doing a Walk to raise money to help in the prevention of suicide. If I recall correctly, I believe she said she had three family members who committed suicide from clinical depression.

So, Jim said to her. "Oh, our first musical was about a songwriter who was suicidal. Takes place..."

Marriette snapped to, "...in a recording studio! I saw that! Was that you? I stayed around afterwards and met the cast, tears streaming down my face."

And suddenly, we had a real connection. It was great! That's when she told me about the "Out of the Darkness Community Walks" by the American Foundation for Suicide Prevention.

I told her that I had met a number of people with clinical depression during my time writing this blog. And that I knew how debilitating it can be. I also met a wonderful songwriter at Kulak's Open Mic who just recently, by changing medication, got out of bed for the first time in two years.

It felt so good to make such a heart connection, and especially that the connection was made through The Last Session. 10 years later and it's still remembered.

If anyone reading this would like to help Marriette and support the fight against depression, she has a donation page here. 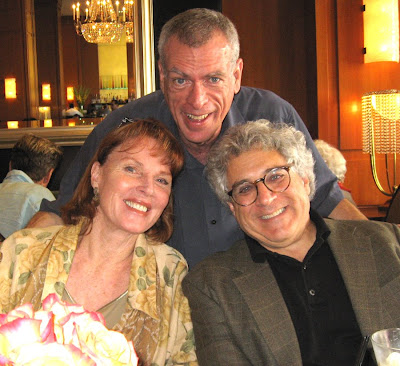