Who Knew From Pismo? 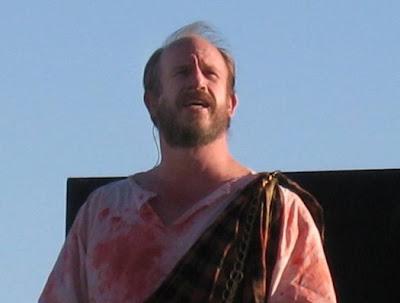 Phone. Michael. "Hey, why don't you drive up the coast with me up past Santa Barbara tomorrow?" (This was last Friday.)

He pushed, "I'm sick of the city. I just want to get out of this town, and also, Travis is doing Macbeth in Pismo Beach."

"Oh, right! Shakespeare in the park. I'm in. I've never gotten to see him. Is he a good actor? No, wait. Don't tell me. Let me just experience him. So, it's outside?"

"It's in a park on a beach, so bring beach stuff. Do you sit out in the sun?"

"Never. But I have swimming trunks."

"Well, I don't know what's there or what we'll do. So, I'm bringing towels and a blanket."

He picked me up about 10am and I packed a little bag with swim stuff, some munchies. And off we zoomed, his hybrid purring like a kitty cat.

It had been awhile since we'd had a chance to just chat and gossip. Took about four hours to get there. But Michael wasn't sure which beach it was. All he had was street exit. So, we got there, and after driving around lost for about 20 minutes, we found it.

Now, I'd heard of Pismo Beach before, usually wrapped up in a punch line. After all, it's a "P" word (and P words are funny, per Neil Simon).

We pulled up to a guard booth. The man inside asked if we were planning on driving on the beach.

We looked at the beach and saw that on the left, the shoreline was packed with trucks, SUVs and cars. I don't think I've ever seen that before. To the right, were people only.
First we got lunch at a "seafood restaurant" right near the beach. I knew we were in trouble when I saw that the menu opened to FRIED SEAFOOD PAGE. It was the worst menu I have ever seen in my life. We ordered fried seafood, all of which was made from frozen fish.

Michael and I marveled, "How is it that they managed to make fried food tasteless?"

After lunch, we decided to just walk on the beach. The sun was not quite beginning to set and it was a beautiful day. Michael had the sun screen still in the car, but this wasn't going to be our camping site, so we'd just walk for a few minutes -- which turned into a couple of hours. We walked for a good three miles and back, down to a pier we saw stretched out over the water.

Took a little longer than we anticipated, but the water felt good on our feet (though there was a yellowish tinge to the surf -- we didn't know if it was pollution or some kind of yellow sea foam. We imagined getting back to the car with our feet melted off the skeletons).

This is the view from the end of the pier: 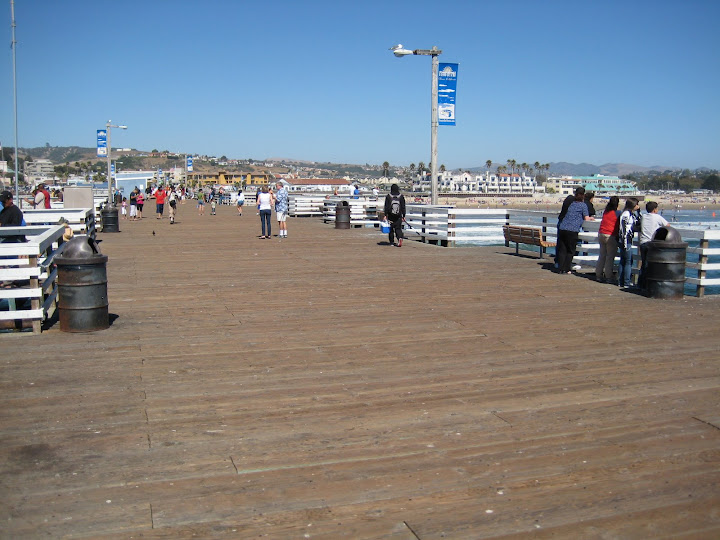 The beach from the pier: 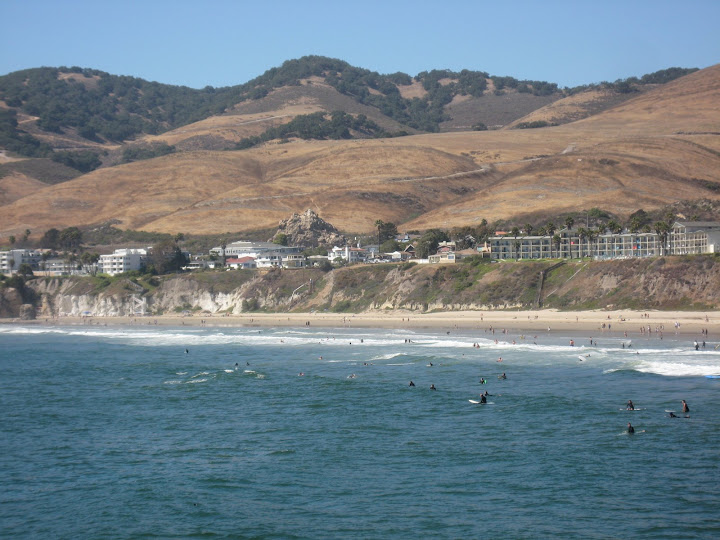 As you can tell, the landscape is beautiful with its rolling hills. 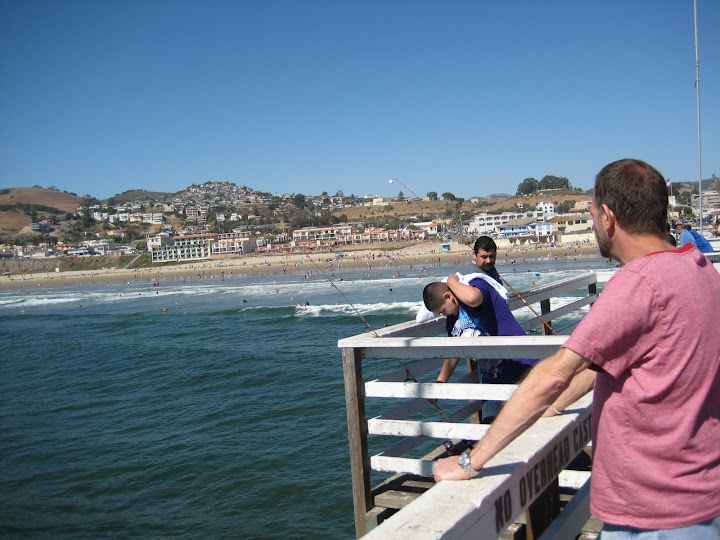 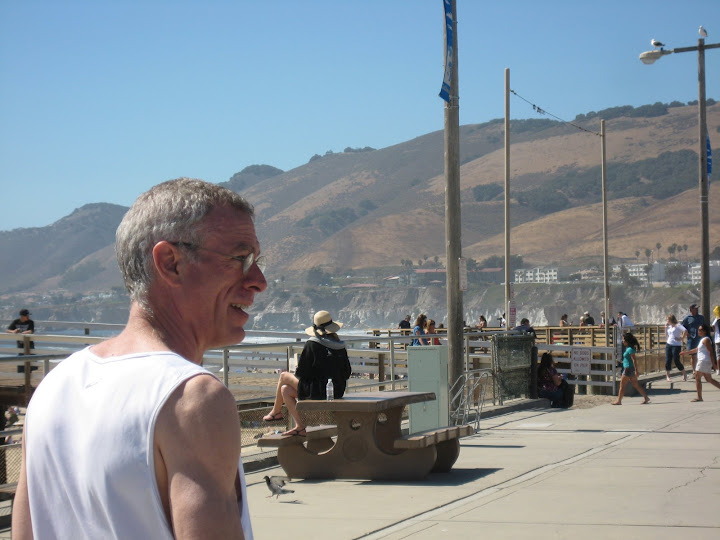 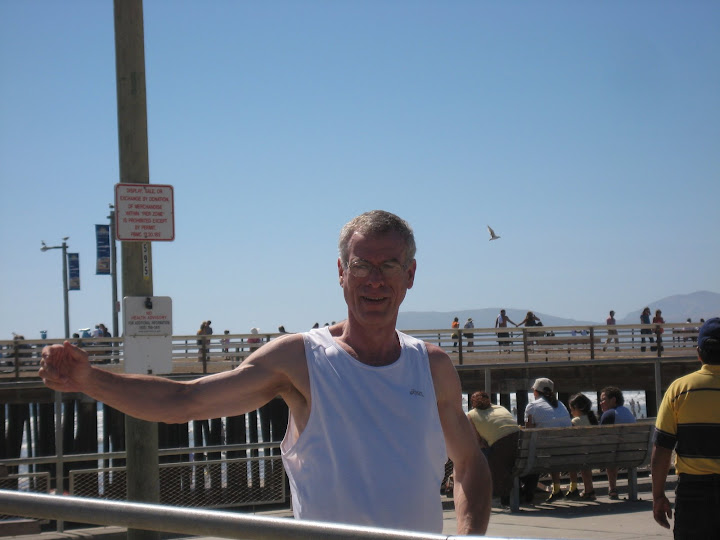 Me at Pismo Beach.

I think the best way to describe Pismo Beach, aside from the fact that it was spotless, is that it was kind of like the New Jersey of California beaches. This is where "normal folk" go, as opposed to the Beverly Hills set with their fancy cabana boys and Mai Tais (though there are some hotels on the beach going for $300 a night). 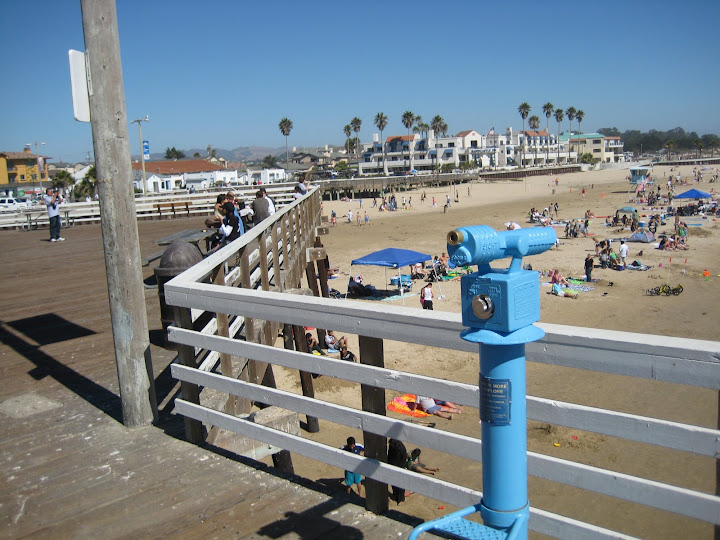 I liked it here. No one putting on airs or trying to impress anyone else with their yachts. Just "folks" taking a weekend from the inland territories south of San Francisco and north of Santa Barbara. 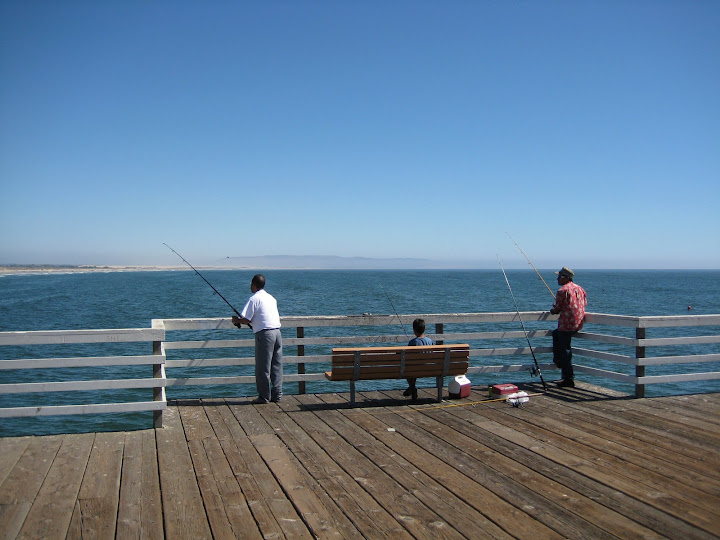 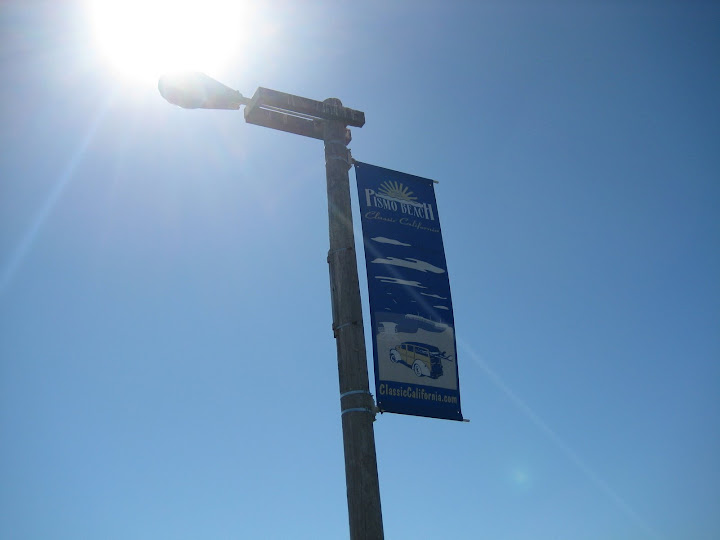 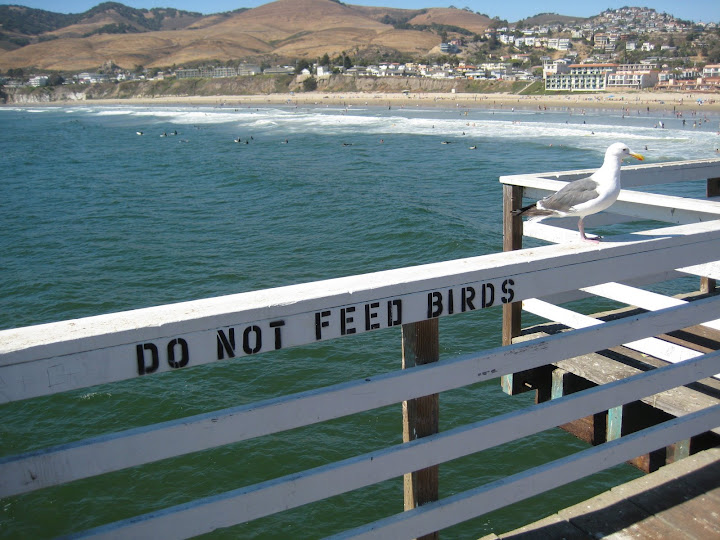 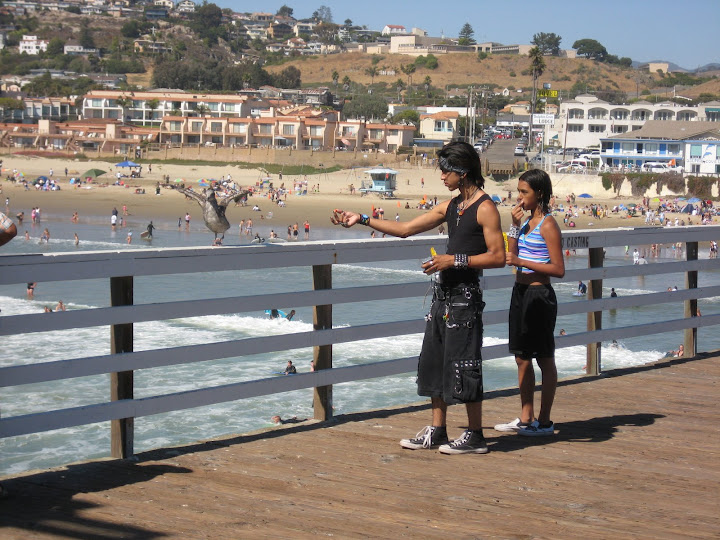 As the day was waning, we decided we better find out where the "Shakespeare Under The Moon" was happening, so we found an Information Booth there on the pier. As you can see in the pic, not fancy, but very nicely kept. 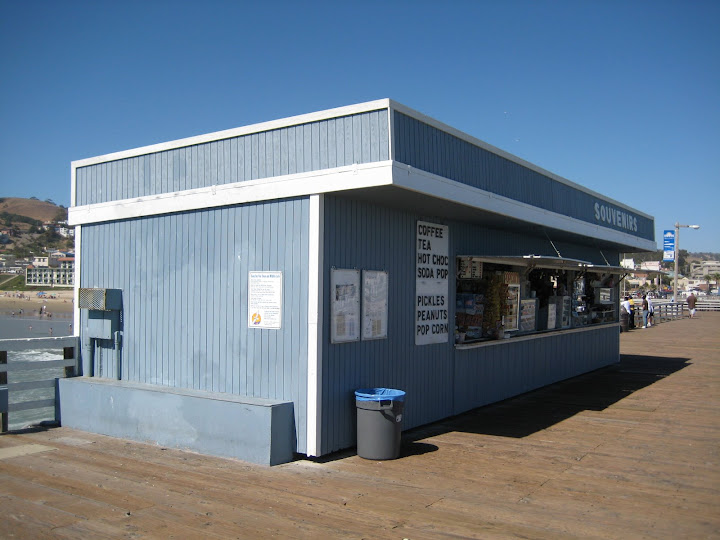 And there was a poster for the "Independant Players." (And no that's not a misspelling. They have an "ant" on their main page.) They'd be up farther at Dinosaur Cave Beach, which turns out to be a smaller park sitting on some craggy cliffs. 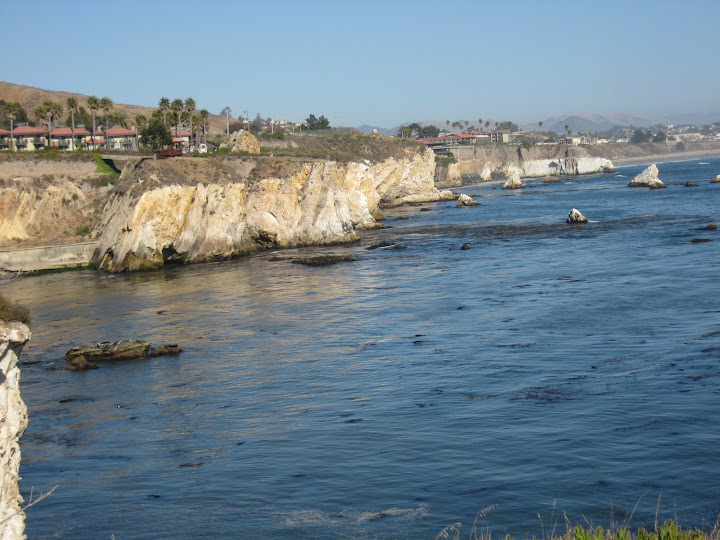 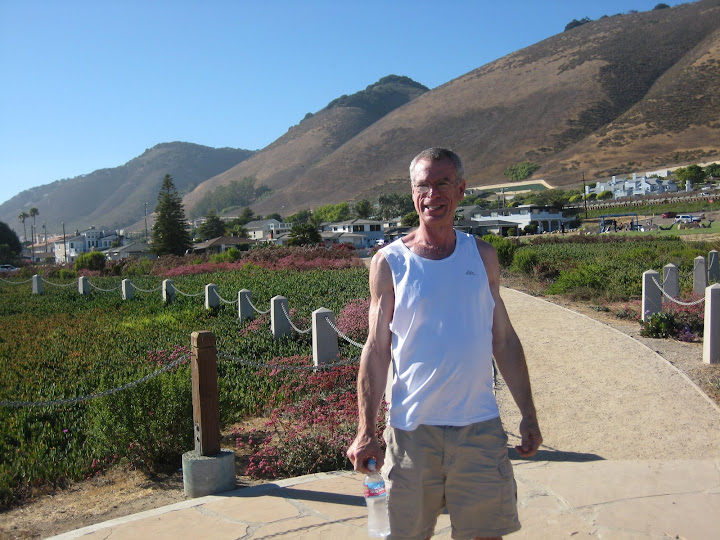 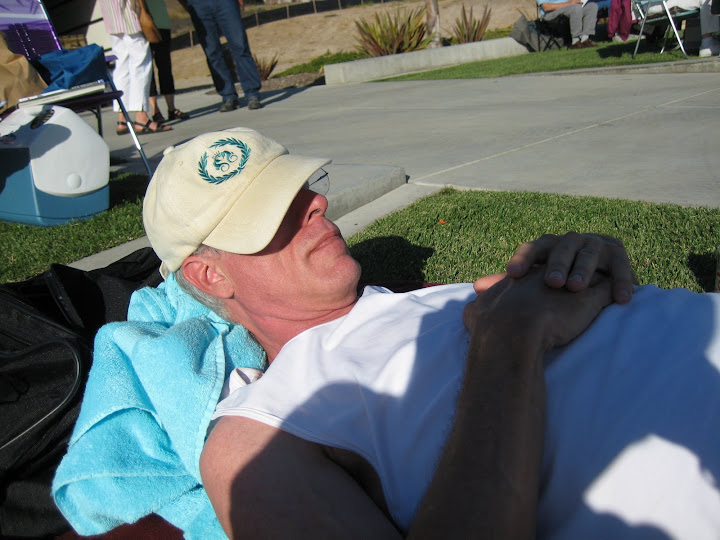 Michael, who reads this blog, knows that Jimmy loves to take pictures of me asleep on holiday. So, here's the obligatory "Steve Sleeping" shot at the place where we finally spread out a blanket and got ready for Macbeth (Or, as they call it in the theater, "The Scottish Play." You're never allowed to say "Macbeth" when you're in a theater. It's bad luck.) 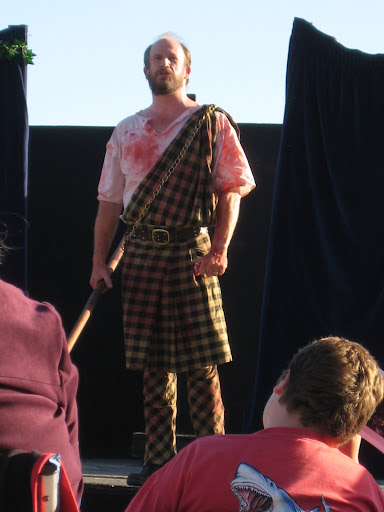 Happily, we did not have to play Green Room Perjury with Travis (not that there was a green room), who, to my utter delight was playing the title role. In fact, he was better than good. He played Macbeth with a solid mastery of the language, managing to make ol' Mac look both heroic at first, and then cowardly and then insane without ever missing a beat. 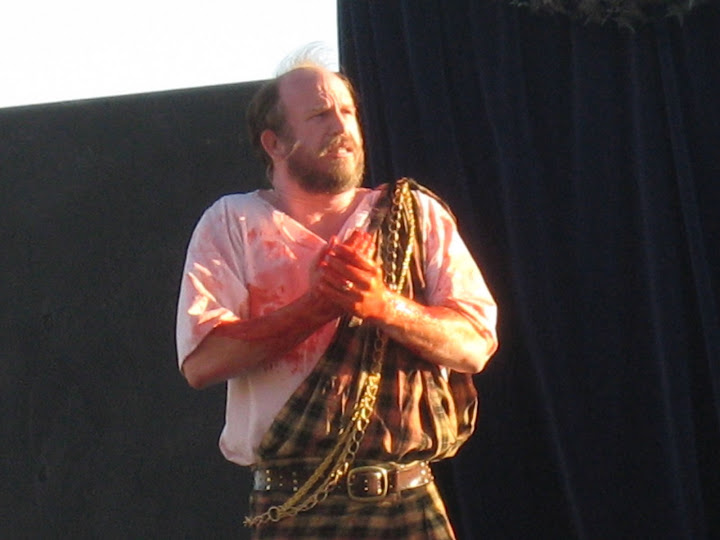 I cannot imagine working outside like this and trying to convey character, much less keep from falling off the stage. But he did it. And both he and the excellent little rag tag band of troupers managed to hold the crowd of several hundred completely transfixed for the two hour performance. Even the kids were mesmerized by the show, as they laughed at the funny parts and gasped at the climactic beheading. Bravo! 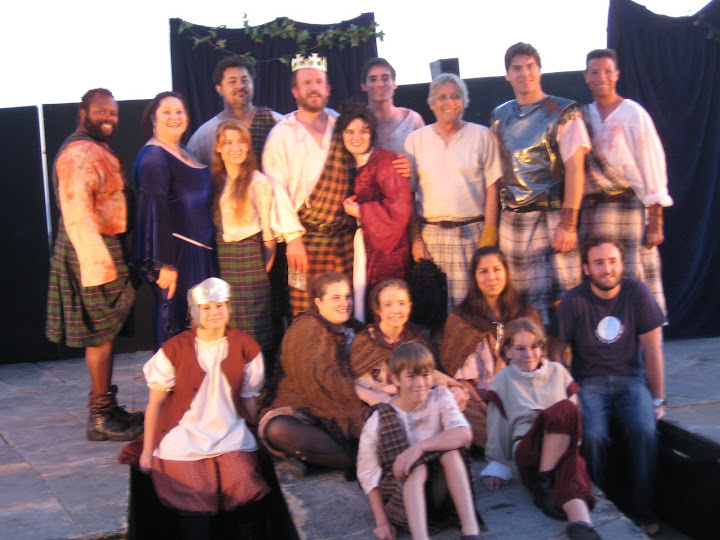 The next morning, I saw that I had what we in the "I Love Lucy" trade call "Don Loper Red" arms, neck and shoulders. It looked like someone painted me. But it didn't really hurt all that much. And I'm so glad I was able to spend time with Michael.

It's hard, when you're a couple, like Jim and I are, to find time to hang separately with friends -- something that I think is important for couples to do. So, even though I miss Jim terribly with him still being in Florida (until Monday), I've been able to spend quality time with several of my other friends (though I suspect Jim might be bribing them to do so just to keep me out of trouble).

I know it would have been difficult for the three of us to pile into Michael's car to make that trip. So, it was the perfect little holiday. And best of all, I finally got to see Travis perform -- who, by the way, did not know we were coming. And that was my favorite part of all, surprising him so far away from home.
at August 06, 2008

Thank you so much for coming and seeing the show! I'm glad you and Michael enjoyed it. :)

Tom's in-laws live in Pismo, and Tom spends a lot of time there. We've driven through hundreds of times and I've gotten off to take a break, but I've never actually been in the town or the beach area. Looks like I should take a look some time.

I'd also love to see Travis. I know he's performing in Redwood City but I'm not sure I want to make that drive this month, which is so busy with wedding plans and a bazillion other things.

It was a great day, in spite of the awful fried fish. I truly needed to get away from everything and have a day of wonderful company and conversation. Pismo Beach was beautiful and what a treat it was to see Travis do a superb job with Macbeth. Didn't he look cute covered with blood?
I couldn't resist snapping the shot of you sleeping. It's no wonder Jim also likes to take pictures of you sleeping. You look so harmless and innocent when you're asleep.