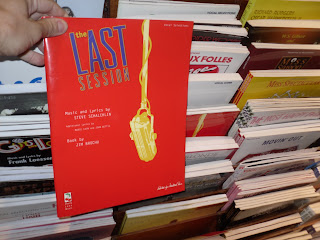 This morning, having followed Ken Davenport's call to put your shows in your Google Alerts, I discovered an audition call for a new production of The Last Session.

(And I have to say, it was really exciting to see The Last Session score so prominently displayed in the Theatre Circle music rack. (Two below La Cage Aux Folle. I swear I had nothing to do with it, but I think the TLS score is out of print, so I bought one, and if you want one, you should jump now. Here's their website.)

But. Indianapolis. Ruth Hawkins is directing. In fact, Ruth directed TLS when it was there in 2004. I played Gideon, and we had this great bunch of young people to play the other parts. It didn't seem to matter that I was a hundred years older than the rest of the cast.

It's being produced by a church group called "A Theater Within A Church Within" (this is the link to the audition. So, it's a theater company which is part of a non-denominational church. I went to their website and thought it looked interesting, like a waystation for people wounded by the religious cultural war. Strays who feel left on the side of the road.

From their site, it looks like anyone can join in. I bet Anne Rice would fit right in.
at August 10, 2010

Email ThisBlogThis!Share to TwitterShare to FacebookShare to Pinterest
Labels: The Last Session, theater