Health update and some unexpected fun with a friend.

First of all, I got my cards for my Oct. 27th gig at the Metropolitan Room. 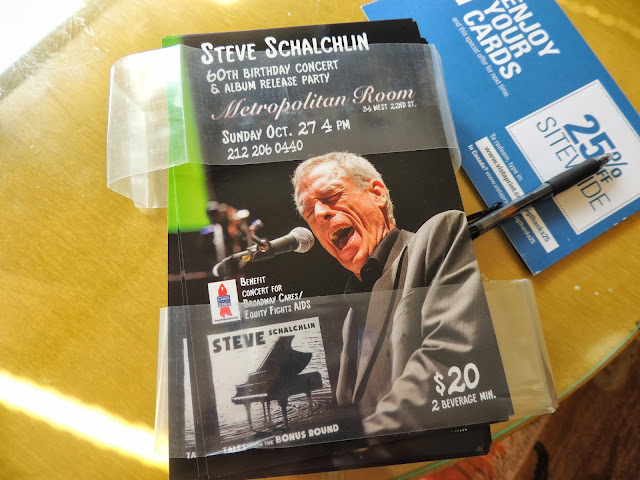 Now that the weather has cooled a bit, and it's more fun to run, I thought I'd run down to the Metropolitan Room, which is about two miles. In fact, I've lately found myself avoiding the subways or buses unless absolutely necessary, preferring to run or power walk to my destinations. I remember when I moved to NY back in the early 80s, I was surprised at how small the island actually is, and how close together everything is compared to LA, which was spread out for miles and miles.

I saw owner, Bernie Furshpan, who, with his wife Joanne, has become a great friends of ours. He stuffed my cards into one of the little displays at the front of the club and then asked me if I wanted to co-host a radio program with him that afternoon. 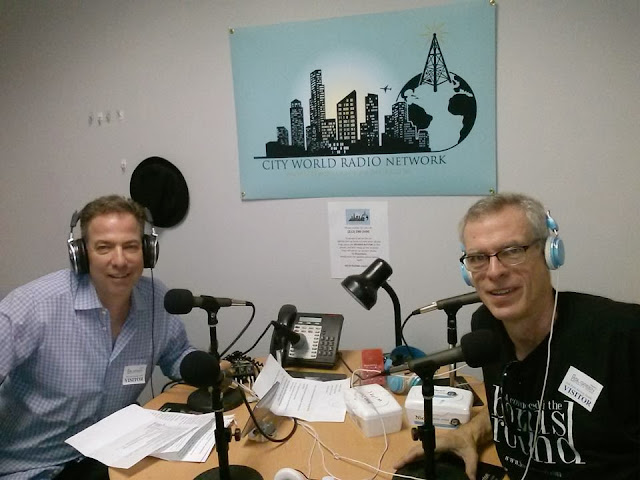 I also ran over to Swing 46, where Jake and Katie work, dropping some off there, and also at Don't Tell Mama, where I've also performed.

There is such a wealth of great performance places here. The Metropolitan Room has a great stage and piano. I think we won't have any problems filling it for the one night. (I hope).

Healthwise, I ran 9 miles the other day. I paid for it the next day, but refused to lie still. I put in another 5 miles -- and then slept all day. Then, 3 miles the next day. But my average run was up to 5 miles before the big 9 mile day, which happened mostly because I had errands to run. And I ran to each of them.

This work is crucial because it's driving down my dependence on insulin, as I wrote about earlier.

Every street and view in New York City is interesting. I remember the other morning, I hit Times Square just as the tourists were beginning to come out, about 8am, and I overheard these two younger guys, complete with shades, say, "Woah! It's just like the video game."

Yesterday, I enjoyed being the guest of the podcast, Powder Keg of Awesome. I think I still talk too much. But this is a great way to learn. And they were great! Everyone in the "room" was bursting with energy and great stories.
at September 26, 2013