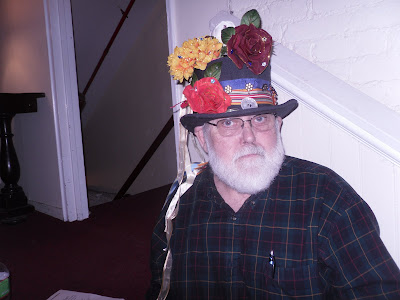 Today’s painting was auctioned off for $90 and we collected $42 in the BC/EFA bucket from audience members leaving the theatre. This brings our grand total to $3065.73. 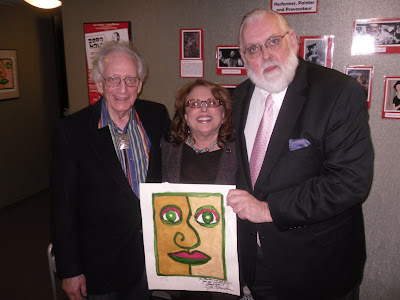 Every year, the Broadway community holds, for Broadway Cares/Equity Fights AIDS, a big "Easter Bonnet Competition," which is the culmination of several weeks of fundraising. You've been reading about it here on this blog, as I've posted photos of the people who've bought paintings from Zero Hour.
The woman in the photo above saw Jim at the Dutch Treat Club. She bought the painting for $85 after beating out another man, who was trying for his second, and who promised to be back again next week to try again.
But here's the problem. The auctions will end this weekend. As much fun as they are, it's really an imposition upon people's time to "hold" them for a few moments after the show is over (not that people can't leave, and have). Plus, people don't come prepared for a fundraiser. That's why I don't do a big guilt trip when I make the pitch after the show.
I just say, "Our company has been touched by this disease, and we have friends and family who depended upon them in times when they were really sick. So, this is our way of giving back. If you can make a small donation on your way out, we would greatly appreciate it." And then we auction off the painting.
Plus, I do believe the paintings are a wonderful keepsake of the show, and have grown as a fundraising opportunity for non-profits, and maybe even for the show itself. We don't have a lot of money for promotion, for instance. Now that we've raised money for our community, maybe we could even raise a little money for ourselves, money that can go into promotion and marketing, which everyone knows is the bane of producing off-Broadway in New York.
Last Monday, we attended the Lucille Lortel reception for all the nominees, and Daryl Roth, whose getting a lifetime achievement award, and who owns the theater where we're playing, said something about being one of the few who still believes in Off-Broadway. And she's right.
There was a big article in the Times not too long ago, about how all the producers are "realizing" that the only way to make money is by throwing your show on Broadway because you need a Broadway-sized budget to make a dent in being present.
A NY Times listing -- not even an ad, a listing -- is $500 a day. More on the weekends. But audience members don't know this. A lady told me last night that she thought we were closed because we weren't in the listings that day. She thought they were free.
Anyway, we have assembled a group of 13 people for our number. Amy Lynn Shapiro wrote a specialty lyric. And we're going to do it on Monday. I have photos from our rehearsal, and a little video. Soon.
Oh, what's the song we're singing, you ask? Well, picture Tevye from Fiddler on the Roof with a bonnet on his head. 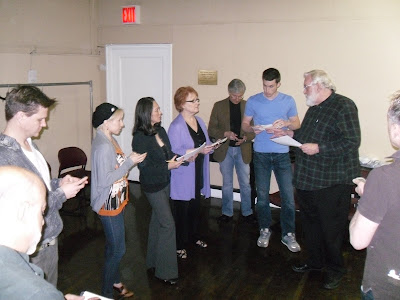