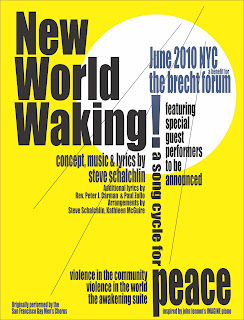 There will be a big announcement this week regarding a theater and performance festival here in New York and we're going to throw together what I'm calling an "open source" performance of New World Waking.

To that end, I've been collecting and revising all the sheet music, uploading it to Google Docs, making it public, and then sharing it with whoever, that means you, reader, wants to join us that night.

The reason I've been revising them is that most of them are in male chorus arrangements, which makes sense since the first time I scored most of them was in tandem with Kathleen McGuire for the SF Gay Men's Chorus.

However, I've now started making newer, more stripped down arrangements. I finished the first one last night for Gabi's Song. You can get it here. I've included the sketch of an arrangement on the melody line, but with the lyrics on top. I also corrected the piano. It's not exactly how I play it, but it's close.

I've also updated the NWW website, including the graphics and "The Making Of" page.
at May 12, 2010