Our friend, Larry French, has died. 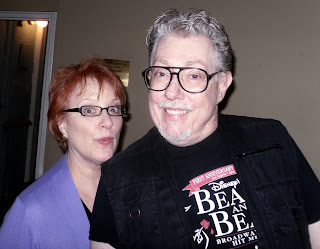 The truth is that I didn't know Larry French, personally, all that well because we didn't see each other all that often. But he was family because his wife, Jeanne, and Jimmy have been friends for 40 years. So, when we greeted each other, it was always with open affection and howyabeens.
Both Jeanne and Larry are singer/actors, and have worked, professionally, for years, both with Broadway credits. We were with them just last week, sharing a cab ride home from the theater. And only a couple of weeks before that, we were sharing the stage of the Minskoff Theater singing "The Bonnet" for Broadway Cares/Equity Fights AIDS.
Larry and Jeanne had also agreed to perform in New World Waking.
So, Jim comes home Friday night. I'm asleep on the couch. He wakes me up to go to the bedroom. By then, I'm awake again, so he says, "I didn't want to tell you this. I was going to wait until in the morning, but Larry French just died."
Died in his sleep, we discovered later, when Jeanne posted a notice on his Facebook page.
Larry was really one of the nicest human beings you'd ever want to meet. He wasn't even 60. I think someone said 58.
For a couple of days, we weren't sure what to do. Finally, I wrote Jeanne and asked if I could dedicate this New York debut of "New World Waking!" in his memory, and I was so grateful when she enthusiastically said yes. So, June 20th is for you, dear Larry.
The heartbreaking news also made me realize that, God forbid, if something happened to one of us, even though we've actually been through the whole deathbed scene a few times, I don't know what I'd do. I think I'd just want everything and everyone to just stop.
at May 31, 2010

What a lovely post, Steve. I’ve known Larry and Jeanne more years than I can remember. My heart goes out to his family and, of course, Jeanne, the sweetest, kindest person you’ll ever meet and a wonderful colleague...I write this with the utmost sympathy.

That sucks so bad (death, I mean). What a lovely tribute to your friend.

What a loss,With such great love comes great pain and My deepest condolences to his life partner Jeanne,one of the dearest women I have had the pleasure of meeting.If there is going to be a memorial please contact me to pay my respects when you know