A Party For Charlotte.

Charlotte Rae has been a friend of ours for a long time, now. But she's also one of Jimmy's biggest fans, having fallen in love with Zero Hour. So, when we heard she'd be in town near her birthday, we invited her to come over, invite a few friends and family, and we'd just have an informal little birthday party.
I think at least 50 people circulated through the tiny one-bedroom before the night was out. I was running around getting ice, heating up food, and trying to keep everyone well fed and happy. I don't think I met half the people who came, but oh, my. These are my two favorite photos of the night.
The first one was before everyone else arrived. Jeramiah and Dick Bell made it early. So, we posed for a "if this was a night club act" shot. 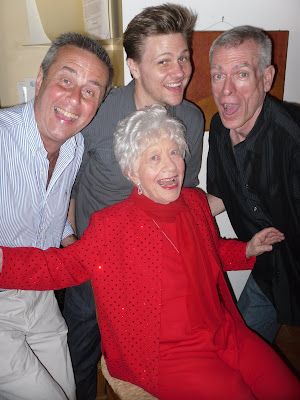 Then, at one point in the evening, I took a break from the kitchen and wandered to the little balcony to get some fresh air. There was this cute, skinny guy standing there. So, we started talking about stuff. Then Jim leaned over, from where he was talking to Bobby Steggert, who has taken New York by storm this year with twin award-nomination in Broadway's RAGTIME and Off-Broadway's (soon to be Broadway's) YANK!, about gay soldiers in World War 2, and said, "Hey, your show debuted in New York at the same that our show, "The Last Session," debuted.
That's when I realized I was talking to John Cameron Mitchell of "Hedwig and the Angry Inch." I have ALWAYS wanted to meet him!! And there I was just shooting the breeze. Of course, knowing who he was, I started stumbling all over myself. Anyway, as they were leaving, we took this one last photo. I'll cherish it always. 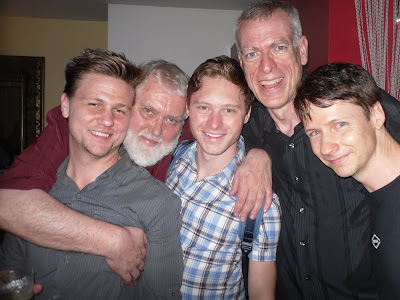