At church yesterday this morning, I was set to sing “He’s Coming Back” but there was something in the air. Father Jeff seemed a little downcast, and I said to him, “Look, there’s this song that I wrote for a children’s musical. It’s a little simplistic, but I could make it into a little sing-along -- and it’s a happy “up” song!
I felt like I knew the lyric. All I had to do was remember that the “poles to the equator” bridge is first. Then, “forests of Westphalia,” second.

I performed it after the "Peace." That was Father Jeff’s idea, to do it right after the Peace instead of after the Gospel. And it was a perfect placement because the Peace is where everyone greets everyone else in the congregation and wishes them “peace.” So, it’s a more informal moment.

I have always been a bit uncomfortable when the congregation applauds after the song when it's placed before the sermon.

Another moment that was strange was when we were singing “Go Tell It On The Mountain.” The choir was just perfect. Then, they said for the congregation to sing it on their own -- and, almost nothing. It was either too early or they were just listening -- which could be the case, given how good this choir is.

So, when it was time for the Peace, everyone from the choir went into the house and all the congregants stood up and greeted each other. I drifted over to the piano, Fr. Jeff announced me -- “our resident composer, Steve Schalchlin.”

And, given the warm informality of the moment, I felt like I could really be myself. Before, the Gospel was read and I was between the Gospel and the sermon. A very sacred moment, really.
But this, everyone was calming down, talking to each other, having a little fun, and I said, “This is from a children’s musical I wrote, and it has a little sing-along. So, sing this...”

I stumbled a bit at the opening since I hadn't planned on singing this song -- and it has a LOT of words, but I survived... 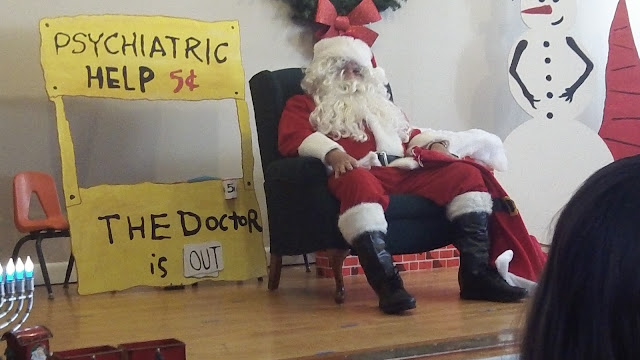 Last week, I was invited to a holiday brunch with the parents, teachers and school children at Adelphi Academy in Brooklyn. They performed Christmas carols, and then the younger kids all performed "A Charlie Brown Holiday," which included the story of Hannukah, since so many of the children are Jewish. It was just wonderful to see all those tiny faces dressed up like Snoopy, Linus, Christmas trees and all the rest. In deference to the privacy of the kids, I won't post their faces without permission, but I did take one snap of Santa that I totally love. And notice the blue menorah in the foreground.

I have a feeling a lot of parents are gonna need that booth after two weeks of holiday.
at December 25, 2011 1 comment:

STAGE PORTRAIT: Jim Brochu in The Man Who Came to Dinner - Playbill.com

STAGE PORTRAIT: Jim Brochu in The Man Who Came to Dinner - Playbill.com

Study shows longterm use of AIDS drugs is safe.


Michael CarterPublished: 08 December 2011A large international study has provided persuasive evidence of the long-term safety of antiretroviral therapy. Writing in the online edition of AIDS, investigators from the EuroSIDA study report that prolonged use of antiretroviral therapy did not increase the risk of death from non-AIDS-related illnesses.

“The main finding of our study was that there was no evidence of an increase in the risk of any non-AIDS-related death with prolonged exposure to cART [combination antiretroviral therapy],” comment the authors. “The results are reassuring that so far prolonged use of cART does not appear to be leading to increased risk of death due to some previously identified cumulative effect, or a drug effect whereby there is a long induction period before disease appears.”

What a terrific song and video this is:

I've been posting songs from our cabaret on 11/11/11 at Don't Tell Mama. This one is called "The Craving," a song about addiction.

Opening Night Portrait of Cast of "The Man Who Came To Dinner." 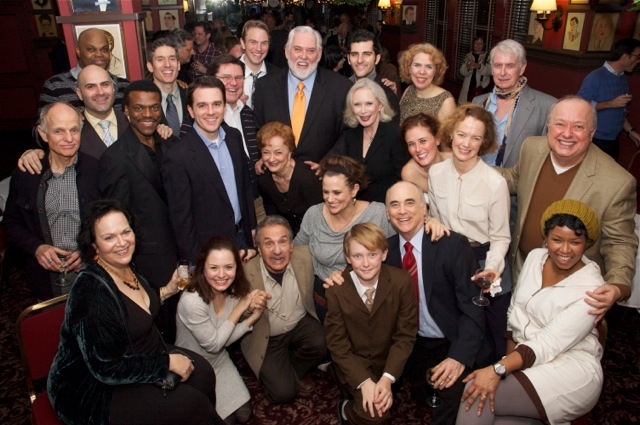 Opening Night of The Man Who Came To Dinner.

It's been an amazing learning experience for me, watching this cast find all the beats of this complex farce, and especially Jim, putting some blood into the role of Sheridan Whiteside. I've seen every preview and, now, opening night. What most people don't know is that this production is on an Equity Showcase contract. There was a maddeningly brief rehearsal time, three previews to get it on its feet, then the critics in the audience, and then the opening night -- which was a fantastic show, their best performance.

But those early shows were previews. It's the place you figure out what's not working. A large budgeted show would have a much longer time to work out all the kinks -- which is, of course, what this run will do. Jim got some great notices, but also got punched a little, mostly for not being mean enough or something.

Well, just stand back. I don't mean that Jim is going to let others direct him, but I know that the show they saw is not the show that will run forward. Really what they were witnessing is Jim finding Sheridan's beating heart. Why would a person do the horrific things he does?

Now they'll all start having some fun -- and it is a very fun show. I sit up behind everyone -- some seats are roped off because they can only allow 99 seats per performance.

What's great is that the people watching this play, even when they're not laughing out loud, they have huge grins on their faces, and their body language is forward and attentive. They are having a very good time.

But to get to this point, Jim is tired. I'm keeping him in all day, rested and warm. I took a lot of snapshots, so I'll post them over on Facebook, so the other cast members can tag themselves.

But here is a snapshot from the party, where they're all getting ready for the big cast portrait. 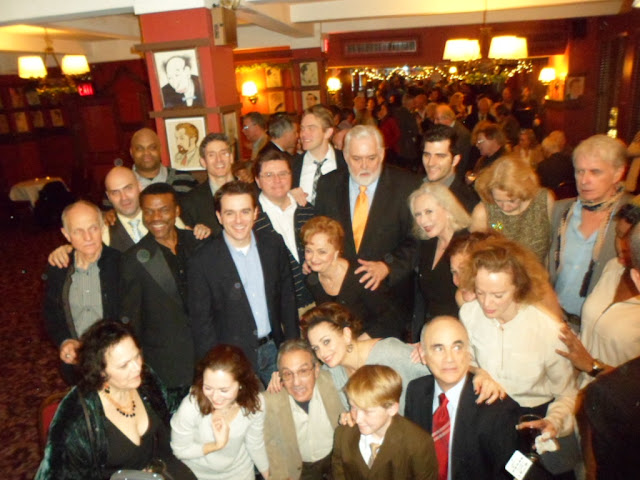 My most recent song about AIDS -- a true story about singing in an AIDS hospice.

Stephen Bienskie live on stage in 1997 in the Original Off-Broadway performance of "Going It Alone."

Here is "The Group" in our TLS reunion concert a couple of years ago.

Kevin Wood rehearsing "Save Me A Seat".

The LA cast of The Last Session singing "When You Care".

Julie Reyburn singing "Going It Alone" for The Spirit of Broadway Awards, in Norwich, CT.

"Connected" is the first song I wrote about living with AIDS.