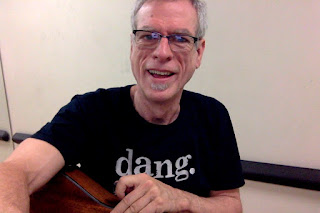 I spent yesterday practicing my E-min pentatonic scale on my guitar.


I was going to post something on Facebook in response to the political outrage of the day, but realized nothing I could think of was really all that different from what I was reading. And I realized it was what I was reading that was churning up a bunch of emotion that had nothing to do with my day to day life.

I went back to the day -- and it's in the diary somewhere -- right after I realized I was going to live again. Took about a month. But I was vacuuming the house and suddenly felt this huge weight descend on me. I began to worry about the national debt.

Absurd. I couldn't fix the national debt today. Why would I carry that burden?

And then I thought, "Is this was 'normal' life was like before I was dying? Did I really take on the stress of things over which I had no control?"

In that year before, and especially at the end, because I "knew" I was dying, I had let all the worries of the world go. Never had I felt the kind of peace in my soul than when I was on my death bed.

But in that moment with the vacuum, as the worries of the universe carefully descended back onto my body, I could actually feel the weight of it. The Before -- when I did not carry this weight -- was just moments away from me, but now in the past.

Was I less effective in my life when I did NOT carry the worries of the world? No. In fact, I wrote my best songs during that period, had my best ideas, was innovative on the Net.

A lesson: Taking on the cares of the entire world does not make you a more effective activist or leader or mother or father. It just means you've added stress to your life.

So today, I thought this:

I cannot fix the world between now and January 1.

So I am going to let it all go, at least here on Facebook, where I prefer to enjoy and check in on the lives of the people I love here on this planet.

While I'll always stay current by looking at the news, my stream here is going to be either silent or not political. And it's fine with me if few will really notice or care. How many friends/streams are we following? One less is not going to change anything.

And in my own newsfeed, I'm going to silence all the political posts so that I don't have to be bombarded by the constant flow of propaganda.

And that's all it is now, these days. Propaganda designed to incite.

I post this, here in the early morning hours before I retreat and practice, only because others might enjoy the idea of doing the same.

That's what an audience listens to when you are doing a performance. That's when you know if they're engaged, is when/if you both share a moment of complete and utter silence. Silence is good, but shared silence is transcendent.

I cannot fix the world between now and January 1.

I am not missing anything by pulling out of the stream of consciousness of the mob's madness.

Trezana Beverley (Tony Award Winner for For Colored Girls...), Jana Robbins (The Tale of the Allergist’s Wife, Footloose, Gypsy) and songwriter Steve Schalchlin (The Last Session, The Big Voice: God or Merman?) perform self-contained excerpts from their solo musicals. Ms. Beverley will be presenting a portion of her portrait of famed singer Mabel Mercer. Ms. Robbins will perform highlights from her critically acclaimed autobiographical show, I’m Still Here, and Mr. Schalchlin will offer The Best of The Bonus Round, featuring original material from his body of work.