The Only Kind of Music (with Jake)

Jake Wesley Stewart came over for lunch, so I did what I always do. Dragged him behind a mic and made him sing a vocal. This was yesterday. Here he is.

My first demo recording with me playing the bass guitar!
at November 09, 2016 No comments:

Each year, I have slowly added to my ability to create music from home. Last year, I picked up the guitar (acoustic) and have been learning it, while writing guitar songs. I've been making demos using it. This Christmas, I thought, now I want to play electric guitar.

But, as I listened back on my demo, though some aren't bad, there was always something missing.

I was playing a bass on the keyboard, a nice sample, as a matter of fact. But the rush of energy that you feel when you hear fingers gliding over the strings of a nice bass, it just can't be matched. So, though my heart wanted to be Keith Richard, I knew I had to first be Peter Tork.

So, I wandered into Sam Ash and told the guy in the bass department my plight, that I wanted a bass, but nothing fancy, nothing tricked out. And, lo and behold, rather than upselling me, he said, "Look, see that Yamaha there?"

I have never plugged in a guitar in a store before. Now everyone would hear me. "Yeah. How do I...?"

He brought me over to an amp -- they sell Hartke amps -- and that's when I found out that Larry Hartke, the inventor, was my salesman.

Not sure yet, I decided to go to Guitar Center where I met with a guy who, after I told him my economic plight, immediately tried to up-sell me with an impassioned speech about the need for a quality bass. I was sure he was right, but all I could think about was that solid little Yamaha.

I exited Guitar Center and went right back to Sam Ash, found Larry and said, "I want that bass."

He took me over to the display and asked what color I wanted, sunburst, black or cherry red. 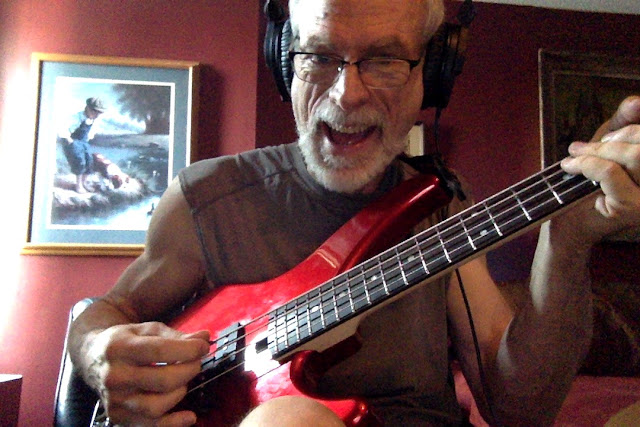