Great article by Molly Gilmore in the Weekly Volcano about my return visit here to Olympia.

I arrived yesterday after a long day of travel and basically slept the whole day. The time zone difference is difficult enough, but I had to get up at 4am to get the bus to the airport.

Thankfully, the plane was on time and though I was wedged into a very full aircraft, right in front of a crying baby, I was happily immersed in a new book called "Genghis Khan and the Making of the Modern World." (We are given this impression that the Western world was so much  more civilized than the east, but he actually implemented freedom of religion, meritocracy and open trade while the western world was still bowing down to kings and living in filth).

Ah, but then, we always the "the other guy" is so much less civilized than we are.

I took a few pics of the theater where Jim is doing Sound of Music. It's a restored movie palace called the Benedum Center and the inside is stunning. 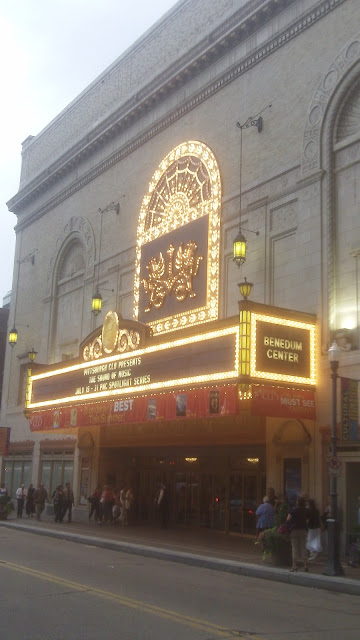 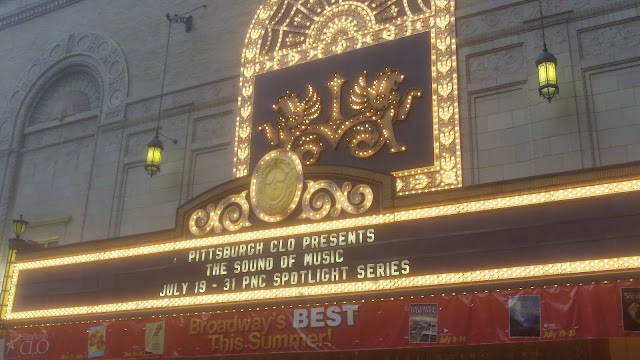 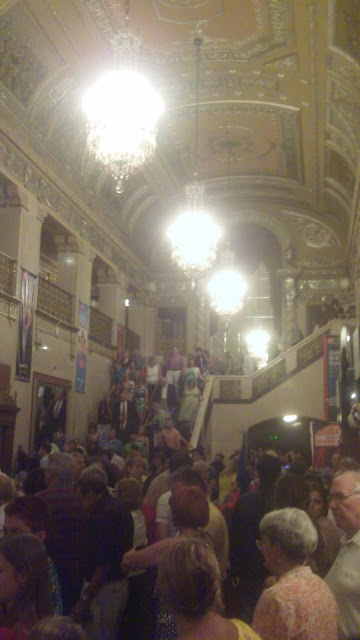 We take a little shuttle from the corporate apts. where the cast is housed and though I walked all around yesterday afternoon I had forgotten my camera, so I'll get better shots today, but what a beautiful city this is. It sits on a promontory on the Allegheny river and there are many bridges, all painted yellow leading into the downtown area.

Sadly, there are also a lot of closed stores. You can tell it needs an economic lift.

I also noticed that there do seem to be a lot of shirtless young men walking around with the pants on the ground. And I mean not just showing a glimpse of brief, but actually showing their entire underwear-covered butts, and waddling like ducks. We get some of that in New York, but I don't even know why they bother wearing jeans here.

The show is terrific. What a cast! And it's fun seeing Jim in a big show with a full orchestra. I'm so used to seeing him alone on stage with Zero, or with me doing Big Voice, I forgot he can do all that big stuff.

Had a great recording session with Peter Link this past Sunday. He has so much experience as a producer and as an engineer, it feels safe to be in his hands. We did lead vocals on "Every Day A New Amen."

The song has morphed a bit since its inception. After I performed it a few times, both at Christ Church Bay Ridge and at the Mark Janas Salon, I finally began making a demo using my rather crude set-up here. It occurred to me that it was too long and needed a section removed.

The patient is fragile, you know.

Songwriting is like a balancing act. An listener today gets bored within five seconds. I don't really like to talk about the process of songwriter that much. Most people find it boring. And, also, who am I to tell anyone how to the write a song? The song you loved the most while writing turns into the song you can't believe you were ever talentless enough to write.

Speaking of fragile, singing a vocal in a booth scares a lot of people.

Singing is emotion. Music is liquid emotion. If you're scared when you sing, then it will sound scared on playback.

And while I can play around making demos on my $100 mic, getting behind a mic that cost thousands of dollars is a whole 'nother game.

But we made it through without any battle wounds.

Got blood tests back. My cholesterol is down in the normal range. (Victory!) And triglycerides are getting better and better, almost in normal range, which is a miracle!

However, my vitamin D levels are very low. My doc said it was a new side effect they're discovering about Sustiva. He said, "I hate giving you yet another pill, but we need to get that back up."

Weirdly, since then, I keep seeing articles about vitamin D deficiencies.

My blood sugar A1C count was down to 7 from 9. This means it's headed in the right direction. Still too high, but getting better. 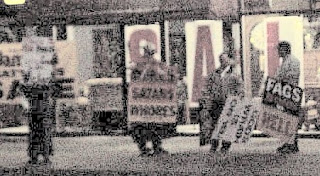