25: A Premature Retrospective gets its first official review.

Thanks to Theater Pizzazz!

"...these two charmers were retrospecting through a totally refreshing evening with some great material."

"Mr. Zolfo proved himself to be not only sweetly funny with a strong, beautiful voice, but a guy who holds back a little and sticks with the emotional truth of a moment."

“'He Was Too Good to Me' (Shirley Horn) and ”Manhattan” (Sara Bareilles)—“I’ll tiptoe away so you don’t have to say you heard me leave”—were subtle and riveting."

"The concept was clear: Blake, 25 years old, is too young to retrospect and Steve, on piano and vocals, sardonically supported the retrospective. But along the way, one realized that in our Justin Bieber world, 25 is older than 15; and our culture is good at assigning failure at any age."

Though I do read music, I hate playing scores. My mind sees the notes that comprise the chord on a page and will fight to play anything except those actual positions, preferring to find my own chord spellings.


However, entering rehearsals on this show with Blake Zolfo -- they've asked us to return next month, May 25th -- I dutifully tried to learn how to play music he brought in. Particularly, his tap number, "What's The Point?", by John Kander and "Dreamscape" by Stephen Schwartz. Lots of notes on those pages. I drilled and drilled every morning, wanting Blake and Andy Gale, our director, to be proud of me. Wanting to get them "right," as if John and Stephen would be there in the room grading me.


But, to be honest, in rehearsal, I sucked. By having to stick so closely to the score, all the life was drained from my performance. It's just not how I play.


So, finally, in a desperate attempt to not sound terrible, I typed out the words, wrote out the chord names over the top, and threw out the score, preferring to improvise.


And the result was magical. Suddenly, they were vibrantly alive. Musical friends wondered where I had "gotten" those very sophisticated yet soulful new arrangements. Marveled at how "specific" and "innovative" it all sounded.


I didn't know how to tell them I was just making it all up on the spot because I couldn't play them the real way. The only conclusion I can come to is that, over these 63 years, I've developed a "style." It's reflected in the songs I write.


It also explains why, over the years, I struggled with writing out scores for my own songs. I almost never play them the same way twice. This can be disconcerting for a performer who needs a consistent arrangement. I might write out an arrangement and, the next day, think, "I would never play that."


But, when you're dealing with a real musician/singer like Blake, who immediately goes with the flow and feels the music, and is able to also be improvisational "in the moment," it means, for the audience, we're all getting a totally unique moment. A new show every night.


In many ways, I miss getting work, probably, because I don't have conservatory training and learned most of my skills in various bands, but I also feel sorry for musicians who cannot do this. Who cannot play a note unless it's all written out for them. Who don't understand "feel."


Last night, according to everyone I trust, and perfect strangers, was a complete triumph. Both Blake and I felt at ease, the audience was screaming at us like we were the Beatles or Beyonce, and yet, we had moments of perfect silence, helped immeasurably by the obviously well trained waiters at the Metropolitan Room, who never disturbed a single moment.


Cabaret is tricky. People want to hear songs they know, but they also want a fresh take, new material if possible, and human interaction. The art of it, when done correctly, makes you feel, at the end, as if you know the person on the stage, that they've opened up their hearts, generously.


By all accounts, this happened last night. And now we do it again in a month. I hope, if you weren't able to make it, that you come this next time.
at April 22, 2017 No comments:

Last night at dinner with our friend, Mary Jo Catlett, who is in town for the opening of "Hello Dolly" with Bette Midler, the waiter told us of the most romantic moment he had with his new beau: When the boyfriend said, of the site where they met,

"I'm gonna delete my account for you. Would you delete yours?"

Our waiter responded to him, "Yes! I had already decided to delete mine!"

And now a year has gone by for them.

As a songwriter, I'm sitting there thinking, "I would delete my account for you," is the worst idea for a song hook ever.
at April 19, 2017 No comments:

Blake and Steve at the Metropolitan Room on April 21. 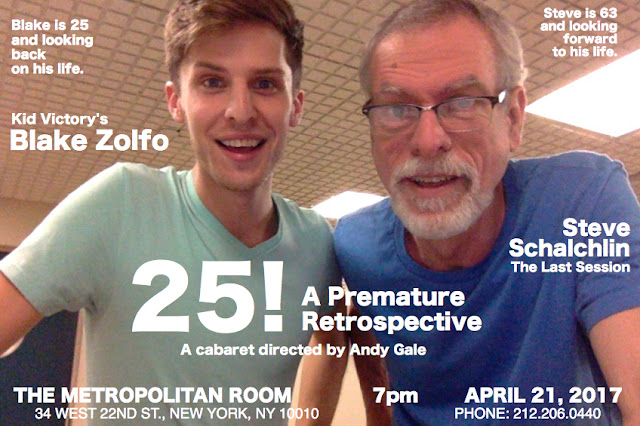 Come have fun with us!

A cabaret directed by Andy Gale