"Character Man" at the Barrington Stage Company for two weeks.

[I didn't know, when I began writing this diary entry that morning at 3am, that Steinbeck would be dead by the end of the night. He had had a stroke and couldn't eat. We thought about having him put to sleep, but it was a holiday and nothing was open. What you'll read was written in real time with only slight editing. As you might expect, this is a very emotional diary entry, so if you are prone to crying and don't want to do it in public, I suggest setting it aside and reading it later.]

I can remember when he fit into the palm of my hand
On the day the man delivered him
His mother killed by a truck
On a movie lot
they were gonna bury the newborn kittens
Our friend called, “You guys want a blond boy?”
“Never turned down a blond boy in my life.”

A man the size of the doorframe
Held a tiny ball of fluff in his hands
Like in those Warner Bros. cartoons
Where the tiny kitten nustles into the back of the huge dog

He was barely old enough to drink milk
Suckling on the folds of my fingers
Unweaned.

He wanders from corner to corner
Beneath chairs and tables
Hiding

Just now I heard his nails haltingly
Scratch the floor in the hall on the way to the kitchen
Or to the catbox.
As if, in his fight to find comfort,
He vaguely remembered being pleasured
By the contents of something in that direction

But, halfway between them, he shlumped over
Exhausted by the effort
And tried to breathe some more

Hu- Hu- Hu- his mouth open
His lungs gasping
His tiny, atrophied muscles trying desperately
To separate that towering rib cage
And jerk some air into his lungs

Hu- Hu- Hu-
I crawled to him earlier, but it only annoyed him
And he stumbled four or five steps to get away
So, now, I just let him lie
And my heart is breaking
And rivers of tears
Are pouring out into the JC Penney carpet

Wait. I can’t hear him now.
Like a ghost, he has vanished from the midway point.
It’s dark. Early morning. Before sunrise.

The A/C is humming and churning
Outside, the air is thick and moist and warm
The kind of weather I detest

I tried to go out there onto the back porch

We have a terrace which we call the back porch

Just to breathe and listen to the sounds of the city
On a Labor Day weekend at 3:39 am

It’s weirdly silent
the partiers have finished at the gay dance club down the street
And they’re moving; a silent pack up eastward on 42nd street
Trying to catch a cab
Sometimes, if there are too many drunk ones
The cops will come along and “loud speaker” them along

I can’t hear him
I don’t know if he’s trying to hide in order to spare me the pain of hearing it
Or if he is just annoyed when touched
Like, “Jeeesus, people. A little dignity here.”
The same look he gives me when I would spy him pooping in his box

He hasn’t pooped for awhile

I hear his nails on the wooden floors again
Distant. Maybe in the bedroom where Jim is asleep.
I go and make sure the door is open for him.

I imagine the worst.
That he’s in such pain, that he’s just adjusting
To find a place where it hurts the least
Like when I had those kidney stones
And had to take the horrible narcotic
Does he need a narcotic?

Jim found, online, people who will come
And euthanize your cat in your home
Right now, that seems so comforting

Down on the floor, earlier,
I knew we were in trouble because
He rejected my offer of water on my fingertip.
I stroked his body lightly.
I told him I loved him and that it was okay for him to go.

I know he didn’t understand those words.
But could he feel it in my stroke?
I want so badly to cuddle him and hold him
Upside down in my arms like we used to do.

DIE IN MY ARMS! IT’S OKAY! I WILL HOLD YOU! I LOVE HOLDING YOU!

Jeez. Now my eyes are burning again.
Words getting blurry

What’s he feeling?
No.
WHAT’S HE FEELING?!!??
I direct that cry, noiselessly, to God
Who noiselessly doesn’t respond

I’m not angry at God anymore
I used to be REALLY angry
Like, we’d pass a church and I’d
mentally toss a bomb through the colored glass
I could never actually do it, of course
I hate religions that feel they have to erase other religions
Don’t they realize that people,,,

Sometimes I want to crawl off into a quiet place

I keep it bottled up, usually.
Not because I’m a martyr but because
I like other people.
And I want them to want to be around me
And I hate being around rageaholics.

Unless they let me laugh at their rage.
Then, it’s funny. Otherwise, it’s just


I can’t hear the cat
I don’t want to go looking for him.
Earlier,
He vomited up the baby food chicken puree
(a trick Jim picked up online)
Stupid Internet

Jim has been crying almost non-stop. Oh my god he loves that cat.

The games he and Steinbeck used to play
Steinbeck as a hat
The roll the cat up in the belly of the t-shirt
little orange paws sticking up
“Where’s the cat?? Do you see the cat?”

And Steinbeck
Would lie still as a sack of salt
Until he had enough
And then, he’d push his way out
At parties, they were a Vaudeville team

In all these 15 years together,
I never really knew what was going on in that brain of his
His gaze was as mysterious as a sphinx
Well, duh
I wonder how much he understood of me
It would have been the understanding of a being
That thinks in images, smells and touch
But no real language. No dialogue.
No holding his attention for a chat.

A chat with a cat.

I used to watch Jim talk to the cat
And then turn to me and inform me
Exactly what the cat had said to him.

That, for instance, it was perfectly all right
For us to go on that trip.
Daddy has to work.

And he developed relationships with the people who cared for him.
Michael. Jerzemiah. Jake. Mark. Lori and Eddie.
Lori and Eddie gave us a bag from a fancy store one time, and
Steinbeck all but live in that bag for a month

He had this way of accepting everyone.
At parties we’d throw, like back when I was similarly dying,
He’d splay himself in the middle of the room
His big fat white belly like a fluffy moon
And everyone would rub his belly
And step over him
And he would just stare at us
Or wait for someone to service his chin

This is the longest night of my life.

That hovering between life and death.

I remember it. Is this what Jim felt every night,
Back then
Me wheezing next to him?

This pain of this grief is almost unimaginable.
And there’s no soundtrack. I have no music on. Just the hum of the AC
And he’s somewhere going

I get up and find him on the bed

Jim, teary-eyed, is stroking him,
“He was just lying there on the floor.
So I picked him up and brought him here."
I see Steinbeck’s little mouth open

And I go into the other room and find myself wailing.

Unconsciously, to relieve the tightness in my chest,
I start beating it. I’m beating my chest, facing the Hudson.


And then we hold each other and weep. And cry out loud a little.

Because of the death of Steinbeck, we are mostly staying to ourselves.

Steinbeck the Cat is Gone. 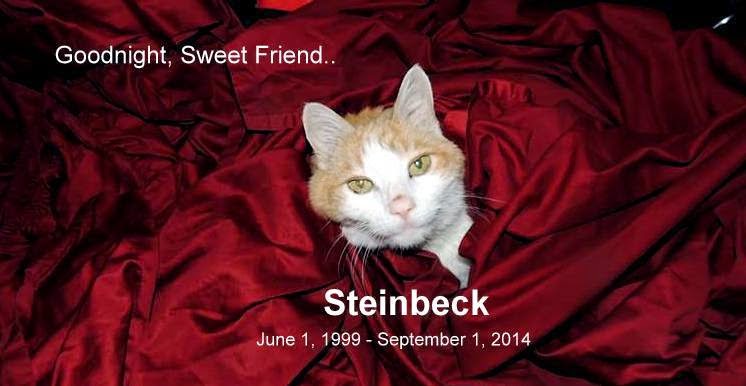 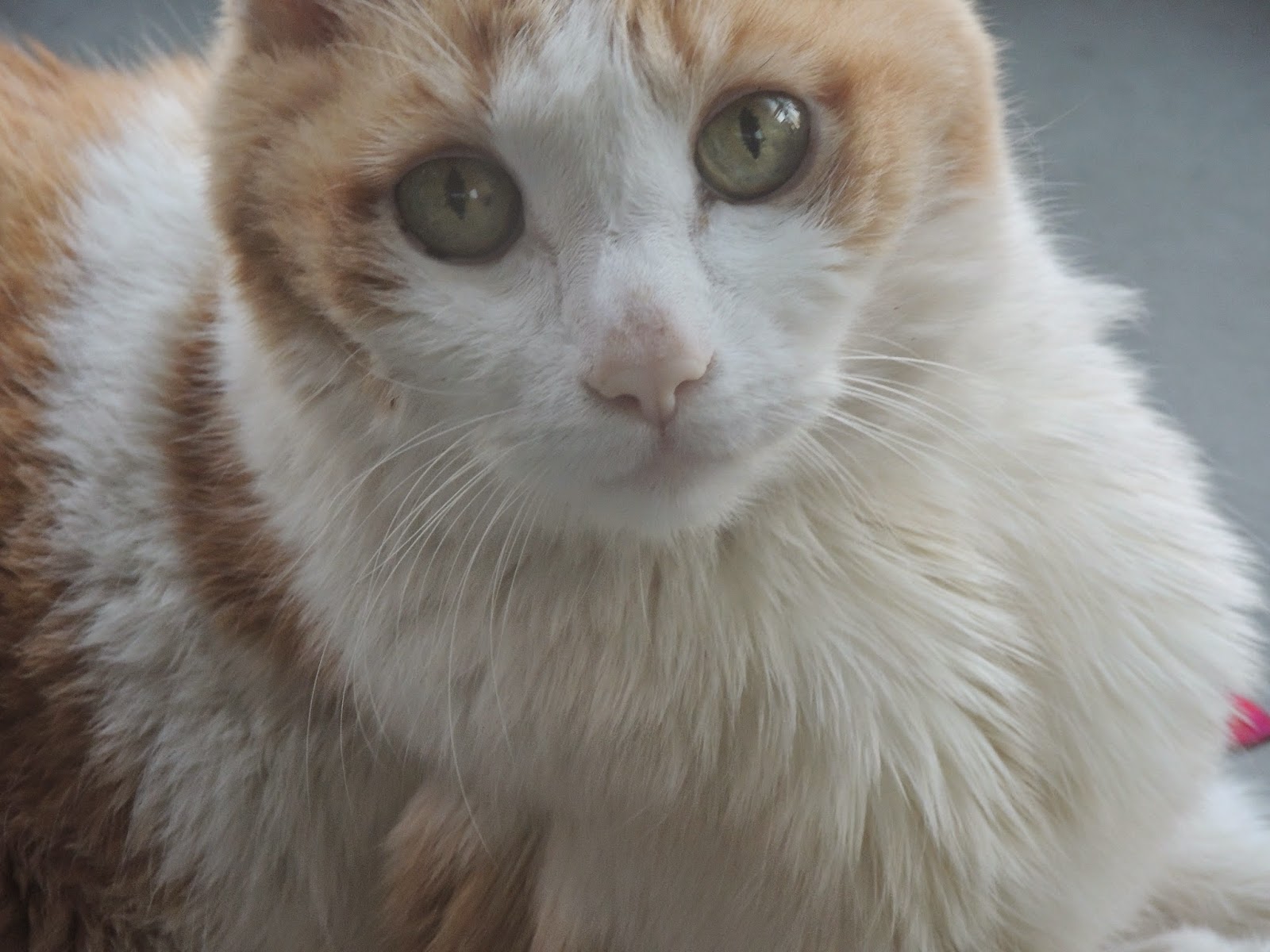 He passed this morning in our arms on the bed.