If not for George Michael, I wouldn't have played John Lennon's IMAGINE piano. We would not have had our mini-concert under the tree planted in Bill Clayton's memory which gave me the concept of New World Waking.

I'm sorry I never got to meet or speak to him and tell him how much he affected my life. I hope, in the new year, you will reach out to someone who affected your life in some small or large miraculous way, unknowingly perhaps, and let them know.

For instance, the creator of the drug that saved my life, Dr. Bruce Dorsey, reached out to me after reading about my new life in my Bonus Round journal, long before it was a Bonus Round. He got to see me come back to life, whereas his life was really constrained to a lab. He job was molecules, not lives saved.


He said, "It's so great to actually see someone living their life because of something I did. I usually only see the lab."

So, thank you, Caroline True, for coordinating the John Lennon IMAGINE piano project. I don't know what became of it, but I know what it did for me. And since you were his friend, I am sending you my sincere love and sympathy. I knew, in person, how much you cared for him.

This is, indeed, a sad day.

Bass playing is all about the groove. I almost felt the groove this morning. 20 takes in. For just one moment, I felt "it," the groove they talk about. It's sensual and controls everything in the song.

And as quick as I got it, it got away because, probably, I enjoyed the moment of getting it and became self-conscious. I can get the notes, but the groove? Stupid bass players never warned me. They just stand there, looking all cool and barely moving.

So, here I sit for the past two hours and all I want is to get this one song. Over and over, I play it. But I just don't lock in. It's elusive, this groove. I took it for granted as a pianist because I could coast over the top of it. Took bass players for granted because I essentially played their part on piano.


But it's different. It's almost as if you have to change your own brain-mind, force it into a different type of thinking and feeling.

So, I haven't been getting it. And then there was that moment. That one moment where I felt it.

Okay, enough about me. What eludes you?

(And I go back into the cave.)

After reading “Once, We Were Heroes”

After reading “Once, We Were Heroes”
By Steve Schalchlin 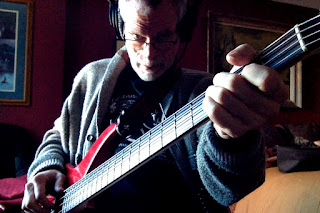 I found an essay about AIDS called


"Once, We Were Heroes by Mark S. King

As the gravity of that sheet-soaked passage hit me
Two tormented souls struggling for one more moment,
I became aware of the young people in our class.
I realized how shocking it must have sounded to them.

"Here, honey. Here’s that poison we mixed together!"

Because to me, having lived through that era,
It felt like a normal and completely understandable
Situation

To die of this disease is to suffer.
There were so many people dying so quickly
in such horrible painful excreta-filled
‘holocaust bodies and faces’ ways

So familiar, that I didn't even flinch when I read it myself

I looked up into the eyes of the 25-year-old boy sitting across from me
His eyes, normally so filled with animated hungry life, wide-eyed and bright
Seemed remote, turned aside
Like he was not wanting to absorb it
or perhaps he was fearing that I, myself, may still go down that way
I’m one medication-fail away from it.

I began to weep
And breathe
And slow down

And then I realized

Back then, he would've been among the first to go.

Like most young actors, he is physically beautiful
Talented and reckless

Like most young people who come from good parents
From Indiana,
He is Eager to sample life

So, when we found each other...

But, in this moment, as the faces of the dead
Appeared in the faces of every person around that table
I was reminded why I grab life so by the throat
And ride it like a freight train

And live the shit out of it

Why learn guitar all of a sudden after 62 years?
Why write songs?
Why?

Because, if I do not, I will be betraying them
the ones we lost
the ones who fell by the wayside
my entire dead generation

How dare I get the opportunity to live
And then squander it
Those hospital beds
People who, in a matter of weeks,
Went from being breathtakingly beautiful to skeletal

I could not look at him and not see them
or worse, imagine what he would look like
if he were them
See his eyes sunken and hollow
His robust cheeks sagging and yellow

But I'm the one who got the bonus round
I feel like I have squandered a lot of it, as it is
But I have found a place in my life where I can do my work
I have a room in which I can rehearse
People helping me
People coaching me
People singing with me

But sometimes I feel them watching me
And they are saying, Really?
That’s the best you can do with your life?

And my answer is always, No. No.