I'm trying to imagine a country without music, but destroying music and art is exactly what the despots, who disguise themselves as "religious leaders," do. From the Wall Street Journal, Terry Teachout reports: 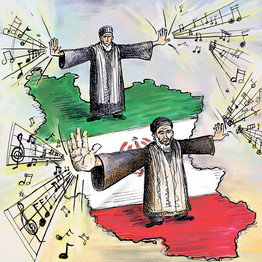 According to the Ayatollah Ali Khamenei, Iran's maximum politico- spiritual leader, the promoting and teaching of music—not just Western music, but any kind whatsoever—is "not compatible with the highest values of the sacred regime of the Islamic Republic."

The Journal's Eric Felten suggested the other day that such attitudes are at bottom political. Music, Mr. Felten writes, "somehow manages to make despots nervous." Why? Because "it affects people profoundly and can't be controlled," which would explain why authoritarians of all stripes look upon it as trouble incarnate.

TROUBLE! Right here in River City!! And here you thought my idea of a "musical insurgency" was just a clever marketing ploy? Do you think we should start body scans when people get on a plane, looking for hidden harmonicas? Will a person whistling while walking down the street get arrested?


He "suggests" that Iranian youth should instead "spend their valuable time in learning science and essential and useful skills and fill their time with sport and healthy recreations instead of music." Those Iranians who prefer to do as they please run the risk of getting themselves stoned, by which I don't mean high.

Apparently, this religious leader never read the studies showing how music helps the brain develop so that it can more effectively learn "science and essential and useful skills." And I'm guessing there won't be any marching bands at halftime at soccer tournaments.


If it seems to you that you've heard that song before, you're right. The Taliban of Afghanistan long ago acquired the nasty habit of blowing up music stores, and they also believe in the word of the Prophet Muhammad, who said that "on the Day of Resurrection, Allah will pour molten lead into the ears of whoever sits listening to a songstress." An equally tough antimusic line is now being taken by the Islamist militia that runs much of Somalia.

Time to find a new god to worship. Christians love music and would never do such a thing, would they?


Most of the early Protestant reformers, including John Calvin and Martin Luther, opposed the use of musical instruments in worship, and Puritans have always set strict limits on what kinds of music were permissible. Many an English church organ was put to the torch in the 17th century, and to this day there are numerous sects that refuse to allow instrumental music in their services.

Oops. Burn those church organs! The Ayatollah, oops, I mean, the preacher don't like no music playing. But, why?


Flash forward to 1698 and you'll find in Jeremy Collier's "A Short View of the Immorality and Profaneness of the English State" a pair of sentences that would sound no less at home in the mouth of a Taliban cleric: "Music is almost as dangerous as gunpowder; and it may be requires looking after no less than the press, or the mint."

When your religion tells you that music is bad, and when your religion blows up music stores and burns musical instruments, you're in the wrong religion. Time to get out, no matter what your "prophet" or "minister" or "holy book" says, said or didn't say.

The saddest thing is that an entire generation of kids will grow up without music. Now, that's how you destroy the spirit of a culture.

Did you happen to see a PBS special about the Beatles' role in bringing an end to communism? It's called something like "How the Beatles Rocked the Kremlin." It is truly an amazing film.