This morning, at Christ Church Episcopal in Brooklyn, at the 11am service, we are going to debut another new arrangement. It's one I had to throw together yesterday, after having worked all week long on another.

Mostly, this week, we've been nesting. After having stuffed 25 years of our lives into 28 boxes -- 30, actually. On the day the junk guys came, we found four more drawers of stuff I had overlooked, but 28 sounds better.

The opening and unstuffing of the boxes, the repainting of the apartment, the careful placement of our pictures and keepsakes. The original Blue Angel poster, signed by Dietrich. Given to us by jazz pianist Stan Freeman, one of the great minds of the 20th century, who accidentally pulled Dietrich into the orchestra pit, thus ending her concert career.

Charles Pierce, who brought Bea Arthur into my living room on the day I was just out of the hospital that first time, when I couldn't lift my head off the pillow. I woke up from a dream where I thought I was watching The Golden Girls. The first thing she did, after I came to, was tell an off-color joke. You have to hear Jim imitating Bea Arthur telling that joke.

The color of the paint on our bedroom walls, which we just finished, is Barbara Red, named after our friend, Barbara Spiegel, who you saw in the Richard Thomas picture. Barbara's mother, Sophia, lives in a place of honor, too. She died in this apartment. She was the sax player in an all-girl band in the '30s and 40s.

New York is filled with such fascinating people.

This past Thursday, we were invited to a gathering where the Drama Desk Awards were handed out. Jim got his statue, which now resides in the living room. (All the rest have been moved into the Barbara Red bedroom/office.) 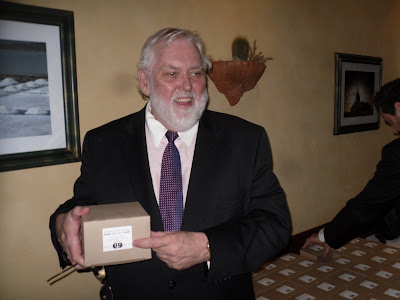 Friday night, I got the best hug.

I was sitting at Mark Janas' piano. I had just played him the SATB vocal arrangement of "Holy Dirt," which I had been laboring over for the past week.  Usually, Mark is a fountain of ideas and opinions. When he gets into the zone, while creating, he thinks so fast, that things pour out. I'm like a kid trying to catch fish leaping over a waterfall when I ask him opinion on something.

And I mean this is a genius perfectionist kind of way, not an annoying kind of way.

Anyway, this arrangement was different. I hadn't asked him anything. I just knew I wanted to do it. So, every moment that we weren't fussing with the house, running errands, going to the doctor, the bank, the driver's license bureau -- a two hour fiasco that I'll tell you about another time -- I was writing this arrangement.

It dominated my mind the whole week. Everything was about this arrangement.

So, when I sat down and showed it to him, when it was all complete, I just waited. He was standing near me, kind of behind me. Suddenly, his arms were around my neck and his head was on my chest. It was so sudden and unexpected that it startled me.

"I'm just so proud. It's perfect. I wouldn't change a note. It's absolutely perfect."

(Later on, as we went through it, measure by measure, he did make one small suggestion, which I used.)

But, after having done that, we decided that, thematically, it didn't fit this Sunday, so on Saturday, I did a whole new arrangement all in one day. He came over. We fiddled with it. It's done.

Wow!!! You've been right out straight! If I could get half of that done, I'd be pleased as punch! Cheers and Kudos! ~ Sil

I haven't seen Mark Janas in centuries, but unless his incredible talent and perfectionistic nature have waned massively over the years, that is one hell of an incredible compliment.

Elan, he said something like that to me one other time. We were at a party where I played and sang "Going It Alone" for everyone in attendance. After I finished, there was this pause, and he said, "That's a perfect song."

So, yeah, it's as good a compliment as I'm ever going to get. Mark does not hand them out easily or generously -- which is what makes them all the more amazing to receive.