Our friend, Fran, is, one of our favorite people in the world. She has overcome a lot in her life, including recent surgeries that left her immobile for a long time, so when she said she would be in town, and really wanted a New York night out, we said that another friend of ours had wanted us to go to Feinstein's for Mickey Rooney's 90th birthday party. He and his wife, Jan, would be doing their night club act.

Now, normally, though it might not seem like it, Jim and I aren't really much for going out and sitting in clubs. We much prefer to be home with our feet up, watching TV, working on our laptops and generally being quiet. But, for Fran, it seemed like the perfect plan. We brought along our actress friend, Barbara Spiegel, because she classes up our act, and we thought she and Fran might really like each other. And we invited Jeramiah Peay, who was our stage manager for The Big Voice and Zero Hour. (Jeremy's been working for hot theater producer, Ken Davenport).

We didn't realize what a star-studded night we would be walking into.

When we arrived early (for dinner) at the Regency, where Feinstein's is located, it was like trying to get into the airport. Security was everywhere because, this week, the U.N. is having some big doo-da, including Iranian charm merchant, Ahmadinejad. So, the police figured every wacko in the world would be in town along with them.

Our friend put us at one of the best tables in the house, which is center, along the back wall of the small room. Naturally, we bragged to everyone in our party -- Fran brought her friend, Joe -- that we ALWAYS get the best table.

We weren't halfway through appetizers when we noticed the people coming to the next table to our right. Regis and Joy Philbin. Jim leaned over to Reeg and told him that he had just mailed him a letter, inviting him to Zero Hour. Regis was polite enough, but not really receptive to some stranger talking to him. So, he kind of brushed us off, which was disappointing, considering we watch him and Kelly every morning on TV, and, naturally, assume that he'd be delighted to be included in our party.
Someone said, "Well, what if he and Joy had a fight or something? Maybe they're in a bad mood."
Didn't matter.

We didn't know who would be there. We were having our own fun. Then, suddenly,  in walks Donald Trump with his wife, Milania. And he sits right down at Regis' table next to us. (He was very friendly, BTW. He and Jim talked about the schools they went to, near each other.)

Then, in walks Michael Feinstein with Arlene Dahl, Elaine Stritch and some other guests, taking the table nearest to our left. I was gawking like a teenager. Talk about class. Then, Tony Bennett sits down. Tony Bennett!!

Little did we know. At first, we had been more or less alone. I had the chicken Ceasar salad because I am now on a new health kick, having overdosed these past months on pizza and pasta -- as all newcomers do when they get to New York. (Every meal I eat, now, at home, is accompanied by a huge -- HUGE -- bowl of salad, made of lettuce, spinach, broccoli, olive oil and balsamic vinegar. Then, I eat a little of whatever else is there, including the aforementioned pasta and pizza.)

We weren't allowed to take pictures during the show, but I snapped this at the end, when they were giving Mickey some tributes. There was a time, when MGM had all the big stars, that he accounted for 55% of their yearly earnings, the biggest box office draw in the world. In the 60s, he was reduced to making $300 personal appearances at parties just to pay the bills. 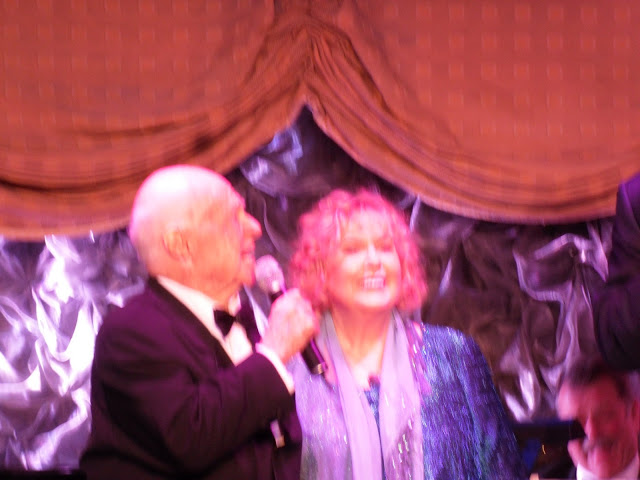 I have to confess that I fell asleep during the show. I hope no one saw. No offense to Mickey and Jan.

And it was fun seeing the stars, but it was more fun watching Fran enjoying all the celebs.
at September 21, 2010

It's funny but when I started reading this, I thought "Gee...I heard about this party somewhere. Where was it now...?" and then remembered it was on Regis & Kelly. Sorry Regis didn't tell the story of the guy who bothered him at the table!

Love,
One of the little people you used to know before you went all Broadway on us.