Philip Loeb was one of the most beloved "TV dads" during the 50s, when he was unjustly named as a communist on a publication called Red Channels, which sought to expunge any possible "commies" from being able to work in TV and film. Eventually, Philip, who was living with Zero and Kate Mostel, committed suicide. Or, as Anna Berger put it, at the panel discussion, sponsored by Actors Equity and the Museum of Jewish Heritage last night, "He died of a disease called the blacklist."

I met the panel earlier that day at O'Lunney's, an Irish bar near Actor's Equity headquarters. Then, we adjourned to the Philip Loeb Room at Actor's Equity. Phil was a fiery activist on behalf of actors, especially concerning issues such as paid rehearsal time, hot running water in dressing room areas, allowing black actors full equality, etc. 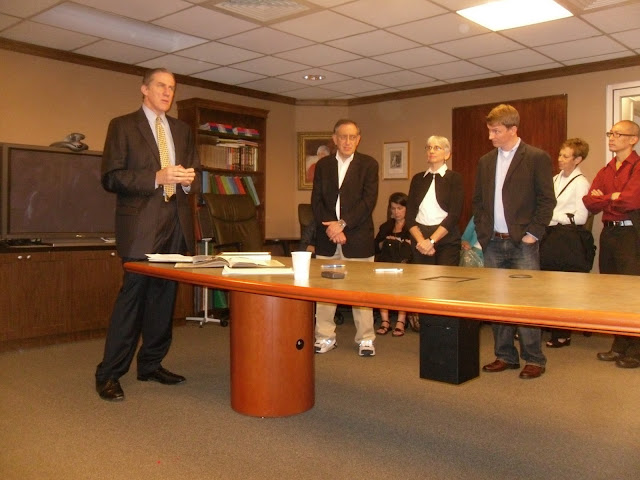 The panel discussed Phil's life, how he was both beloved and reviled, similarly to the reactions people had to Zero Mostel. They both fought against the blacklist and injustice, but their headstrong ways did not win them friends among their opponents.
They also talked about how funny he was, that he could, without notes, keep an audience or small crowd, laughing. Anna Berger talked about how she, as a young actress, found a defender and helper in Phil Loeb. And how, even after he was forced off the show, he would come to the set and be a friend.
Phil died of an overdose in the Taft Hotel after painful cataract surgery. Shortly afterwards, the FBI cleared his name.
at September 02, 2010