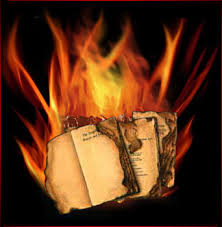 People have been asking me my opinion on a publicity-seeking "Christian" pastor who has managed to gain world-wide attention for an upcoming Quran-burning, especially now that America's other publicity-hungry "Christian" gay-hating Baptist family is protesting that the media ignored their Quran-burning activities.

So let's look at this rationally. To burn a Bible or a Quran means nothing, physically.

After you've burned one, you can go to the book store or a hotel room and find another. It's not like Rev. Handlebar is burning the last one on earth, though would be a great Twilight Zone episode -- where the last people on earth are a bunch of religious zealots holding the last copies of each other's holy books hostage with matches and kerosene.)

In an earlier era, he would have been just one lone nutcase with bad facial hair, making money off the locals and moving from town to town after everyone got tired of his shtick. But, now he's got an army of media waiting in his front yard, all breathlessly awaiting his every word.

When he is interviewed, each commentator gets to berate him freely because he's the current Worst Person in the World, and we all get to hate the Worst Person in the World --  especially when they're religious fanatics who are mentally or emotionally ill. We may not be able to figure out who to hate in politics, but we can all agree to hate Pastor Doc Holiday and his stash of burnable books.

Personally, I believe that when we make objects "holy" or "sacred" we're pointing our sacred-antenna in the wrong direction.


"I said there's not a grain of sand
Worth any girl or boy
But somehow in our twisted minds
The killing turns to joy
We watch it like a football game
And wait for it on CNN
Cuz winning's, somehow, everything
And they'll re-run it all again"

I think it's safe to say that Rev. Handlebar (ROTF) is now mired in the sin of vanity.

And we're all at fault for continuing allowing people to intimidate others by using religious as some sort of test.

Of course it remains to be seen whether anything bad will happen, but as you know, all it takes is just one person who thinks he or she has it like that to define and judge, and play on other's naivety.