Petrina Johnson & The Secret of the Great Big Hall

I fell totally in love on our cruise to the Mediterranean with a singer from London named Petrina Johnson -- pictured left as Judy. (A frequent stage actress and performer on London's West End, she is a very popular singer on the most prestigious cruise ships and cabaret clubs in the world. It's no wonder. Not only does she have a versatile and powerful set of pipes, but she is a brilliant entertainer and comedienne who can imitate some of the greats, including Petula Clark, Shirley Bassey, Judy Garland and Liza Minelli, just to name a few -- her Julie Andrews is side-splitting. But more than that, she sings with absolute heart and commitment.) 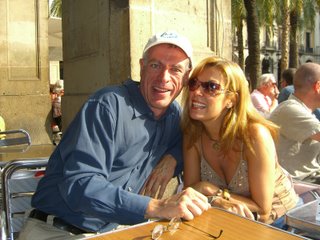 So, after seeing her first show, I did what I always do when I meet a new singer. I walked up to her and said, "Hey! You should be singing my songs! In fact, I just wrote a brand new song and I think it would be perfect for you."

Now, normally, when I make this pitch, since I'm not exactly the most famous person in the world, I get a frozen smile, a timid "um, sure, I'd love to hear it" followed by said singer avoiding me the rest of the cruise.

Not Petrina. She said, immediately, "Fantastic! What's the name of it?"

"It's called 'The Secret of the Great Big Hall' and I co-wrote it with my friend, Honey West, who's a singer in Chicago."

"I love the title. Give me just a moment to change."

And she dashed off, changed clothes, and we met in her room where I brought my laptop and she immediately put the demo onto her computer.

"It's brilliant!" She squealed. Two days later, we met in the piano bar.

She said, "I've been listening to it non-stop for two days. I've written the words out, too." Then she grabbed her notes and we started working on it. The thrill of working with a true professional is that they know their voices and what they want without you having to prompt them or fuss with them. We tried several keys and then worked out a key change and a big, fat ending.

Then I turned on the camcorder and just started taping our rehearsal so I wouldn't lose any of it. We had another rehearsal after that, then on our last day, after the fnal performance of her show, I said to her, "Hey! Why don't we do the song in the piano bar for all the passengers who might still be up and around?"

And we did. Later, I mixed together a video, combining the live bar performance (which had less than optimal sound) and the rehearsal (which sounded better) and some photos and video from our trip and here it is. The Secret of the Great Big Hall:

Watch the Quicktime version
or
Flash version on YouTube
at May 30, 2006

Email ThisBlogThis!Share to TwitterShare to FacebookShare to Pinterest
Labels: video

What a great story. I love stories like that. She does have a great voice. What software do you use to edit your video?

So Many Years have past since I last saw Pet, and it was "FANTASTIC" ( her favourite word) to see her looking as good as ever and with that very special voice just as I remembered the first time I saw her about 16 years ago , and I was so impressed that I asked her to do a summer season in Guensey and still have fond memories of that year.
MY FAVOURITE SINGER STILL

You have EXCELLENT taste!