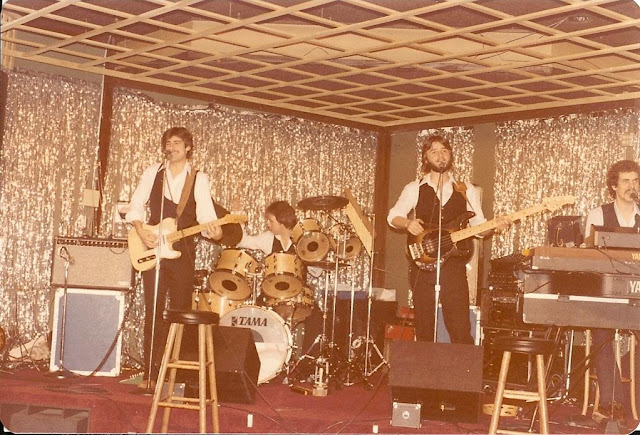 I know I've told this story on the blog, but it came roaring back to me when my old drummer, Chris Hawkins, found me on Facebook and sent me this note.

Steve, I am sure you vividly remember Dec.8, 1980. We were in Columbus Ohio playing at the Rodeway Inn hotel. There was snow on the ground and it was freakin cold for us Texas boys. I will always remember that day. We had heard that John Lennon was shot and killed in NYC and you opened our set that night with a few songs of John's. I was only 18 at the time. That day will never be forgotten for me. You made such an impact on me just seeing how sad you were with Lennon's death and you performed a few songs beautifully in John's name. I will be thinking of that day back in 1980 tommorrow just as I have for the last 29 years. It is so great to have contact with you again.

What Chris did not know at the time was the rest of the story.

It was really cold, as he said. We were in the middle of a long night doing cover songs to a crowd of two, the bartender and a drunk chick at the bar. But the manager said we had to play the whole night, so we had done three or four sets already and I had gone back to the room before the last set, flipped on the TV and saw the announcement.

A profound sadness settled over me. I called my best friend back in NY, Diane, and commiserated with her. Then went back to the club.

With no one in there, I agreed to just sit and sing so that we'd fulfill the contract, and everyone else could just chill until the clock ran out.

I sat down at the piano, feeling the enormity of the death, when I reached out to the piano and began playing "Imagine." I played it all the way through without a single mistake. Now, you're thinking, not such a big deal. Popular song. Everyone knew it, etc.

But I had never played it before.

Not once. Not even in rehearsal. I just heard it in my head, put my fingers on the keys, leaned into the mic, pictured John's face, and started singing.

I guess I must have talked about and sang a few other songs. I don't remember.

So, when Chris sent me this note, I was so happy just to know that he remembered that night from all those years ago -- and that it meant so much to his 18-year old mind.
at December 08, 2010

!980 still doesn't seem that long ago to me. But the world has changed a lot since them in many ways, yet remained the same in others.

Thanks for sharing your memory. I wish I had been at the bar to hear you sing.

Love the Mo Steve, All the best for the season to you and Jimmy. Morrie (Incubation!).