That’s how much time we, a group of students and local celebrities had to cast, rehearse, stage and perform New World Waking. Twice.

We had Thursday from 1 to 5. And then possibly 1 to 5 on Friday. But, essentially, we had the one day.

I stayed with Gabi and Alec Clayton, as usual. They have four cats that circled me suspiciously the whole time I was there. Finally, they let me feed them fish flakes, AKA kitty crack. So, I got a few chin scratches and ear tickling.

Wednesday night, I was tired and went right to bed.

Thursday morning, my stomach was hurting. I hit the bathroom a few times, but it wasn't helping. It wasn't pain exactly. But it had a very familiar feel. (kidney stones again). No. I refused to believe it. I even tried using my will to make it go away.

I also started drinking a lot of water. 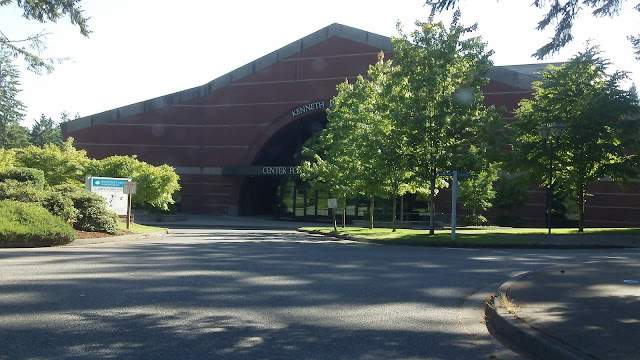 Our set was the black box theatre inside the Kenneth J. Minnaert Center for the Arts on the campus of the South Puget Sound Community College, nestled in the richly forested, rolling hillsides surrounding the small, beautiful port city of Olympia, Washington. 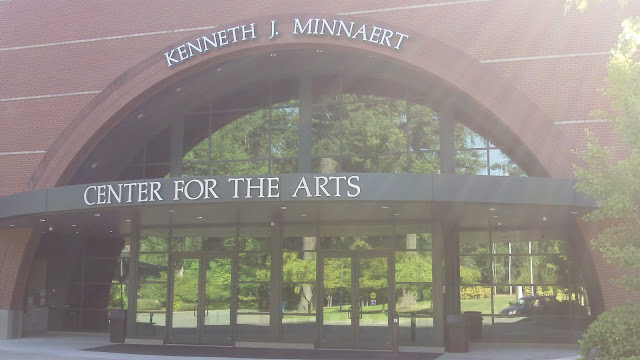 I had a mandate from Don Welch the professor: Show the students how you put on a show.

Well, the only way I know how to learn anything is to just do it.

“We can do New World Waking," I announced. "I’ll come in the day before, cast the solos, rehearse it and we’ll do it in two days.”

I spent the whole plane trip to Olympia wondering what I had talked myself into, and where I would even start.

I didn’t really have a specific plan, but I thought the best way to handle this was to simply treat them as if they were a professional cast and that we were there to put on a show. I'd use the script and scores from the New York production.

I also felt confident because I had a safety net. I, myself, could sing any song that we couldn’t find a soloist for. (Don had pre-chosen the soloists from his advanced class, and they had those solos in advance). So, no matter how much or how little the group learned, the show could still go on!

At least, that was the theory.

Everyone was assembled in the block box theater at South Puget Sound Community College. Before I even said a word, I hit a G on the piano and started singing, “Time to come out...” and then I gestured to the students to repeat it.

They did. A bit tepidly at first; caught everyone off-guard. So, I repeated it, “TIME TO COME OUT!” And they responded a bit louder, looking confused, but definitely joining in. Since the background vocals are simple, just call and response, we finished it in just a few minutes. So, I proudly looked at everyone and said, “There! Now we’ve already learned out first number.”

The response to that was still very tepid and their attention seemed a bit off. Some were texting. Others were looking away, bored. I became a bit annoyed and immediately told everyone to put their phones away.

We got through a few more songs, but I still didn’t feel like most were really present.


So, assuming everyone one here was wanting to get into theater, I gave them a rather -- shall we say -- passionate speech about how much theater means to me, how it saved my life, how I've seen it save the lives of others, and that it's a calling and not an idle hobby.


I said, "Right now, there are hundreds, maybe thousands, of actors in New York living in roach-infested closets, working two jobs to pay for acting classes and dance classes, and going to auditions. If you think you can compete with their dedication by texting during a class or not paying attention, you are out of your minds. That's your competition: People who really care. So, anyone who doesn't want to be here, then please leave. Now. I don't want you." (I might have used stronger language than that).

Then, it dawned on me that maybe there was something wrong because I knew I wasn't really connecting with everyone.

There were five sitting in the front row on the left with printed-out music on their laps. They all nodded enthusiastically.

But the larger group, about 15 or so, sitting higher up on the right hand side looked at me blankly and then shook their heads.

Suddenly, I felt my back starting to throb. Yep, that kidney stone was definitely there. And it was going to be a problem. I leaned over for a moment to gather my thoughts.


"Okay," I said. "Here's the deal. You're in the cast of a new musical and we open tomorrow night."