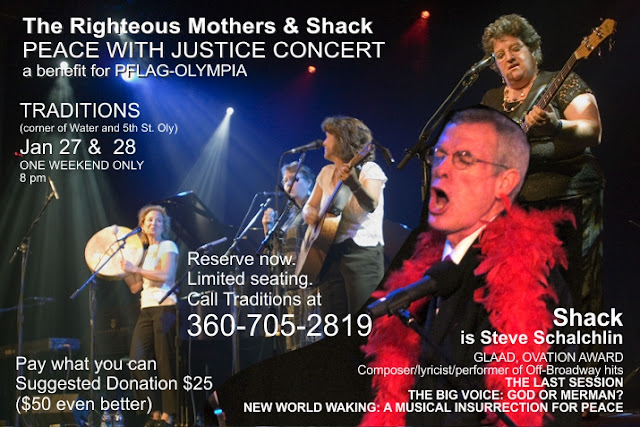 I'm getting very excited about singing Olympia. I think I mentioned that I have been a student again, taking classes with Andy Gale and Mark Janas. I honestly think I've never met anyone with as good an eye as Andy, for helping singers loosen up and deliver a song with intimacy and conviction.

I began the classes at the end of last year, and have continued them through the new year. It's a pretty simple set-up. Mark on piano. Andy and the other classmates in front of you. And you get up and sing. The terrifying thing for me, at first, was just getting used to someone else playing my songs for me. I'm so used to setting the tempo and created the whole moment.

But it's also limiting to be sitting at a piano, so it's a great exercise. I had never thought about auditioning for anything until this class. I would never have had the courage. But now, I think I could probably go into any audition and nail it, meaning have a terrific audition. (Getting the role, itself, is a whole 'nother thing that depends on factors not in one's control, such as height, looks, age, size, vocal quality, etc.)

I wish I had had the forethought to tape these sessions -- and I've even been carrying my camera around with me but I'm so caught up in the moment, I forget it's in my pocket.

What has happened, though, over the two months of training, is that my confidence is building. I don't know whether it's being southern or small town or what, but I tend to be really shy when singing. I can fake it pretty good, usually, like when I got nominated for a best leading actor in a musical in Los Angeles -- what was up with that?? -- but sometimes I can't. I never had this kind of training, the kind of intense training that good actors undergo as they work to get their break in the biz.