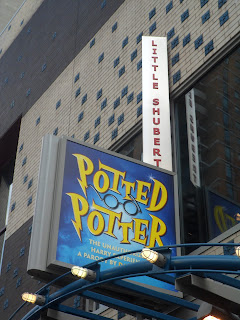 Potted Potter, the unauthorized Harry Experience, which just opened at the Little Shubert here in NY, from several years touring England and Edinburgh, with its original cast of Daniel Clarkson and Jefferson Turner, is the kind of family-friendly/adult-friendly show that is so proud of its silliness, you get swept up in the fun of it all, even if you're a 58 year old man who gave up reading the series at about book four. (The conceit of the show is that they promise to condense the entire series down to 70 minutes.)

When I arrived at Potted Potter and saw that I was surrounded by kids I thought, "Oh, dear. This is going to be a long afternoon." I mean kids and theater? I could just imagine the chaos ahead of me as the kids start running in the aisles or bawling or whining or crying.

I was wrong. And here's why.

The kids got all the jokes. Not only did they get the jokes, along with a few ridiculous references to Lord of the Rings and Mary Poppins, but they were enraptured because Dan and Jeff, the actors and writers, skillfully made them feel like they, the kids, knew more than the adults -- and that if they got lost, the kids would steer them back. And "Potter" is filled with a great many plot complications and heavy themes.

As the two men make their way through the volumes wearing silly dime store costumes and constantly fumbling the storylines, the kids around me were riveted. At one point, when Jeff seemed to not remember a certain complexity to an arcane plot point, a kid maybe 7 or 8 years old, corrected him. Loudly. And Jeff just went along for the ride.

And perhaps that's really what makes this show successful. Yeah, it's a silly as a dog wearing a chicken suit, but it's so eager to please, you can't help but get swept up in the laughter.

We even get to all play a game of Quidditch!

How? Well, why spoil the fun. Let's just say that it's as decidedly low tech as the rest of the show, and by the time they dragged some little kid out of the audience, they had dragged it out of all of us.

Since James Seabright is a friend of ours, I thought perhaps my opinion might have been a little tilted. I always want my friends to do well. But, after the opening, the next morning, there was a brilliant little rave in the New York Times.

I wish I could have been there with you, Steve and Jim. I also quit after Book 4, Heheheheh! (Seemed like things were being "padded" to drag the story out.) This sounds like a healthy way to deal with it, and also a barrel of fun!