The People You Run Into. 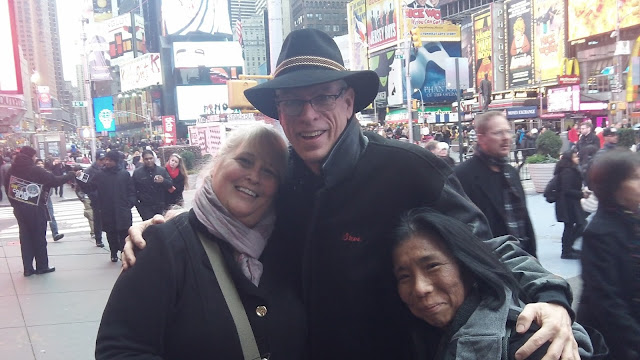 Know what's fun? Walking through Times Square and running into friends/fans in Times Square. Cyndy, the tall blond, and I seem to find each other purely by happenstance, every time she's in town from the West Coast. And we pose for a photo each time, and each time pledge to actually sit over a cup of tea or something.

It wouldn't have happened if I hadn't been wearing my TLS show jacket. You see the man over Cyndy's shoulder, behind us? He was handing out fliers for some comedy club, and he greeted Jim and me by name, to which Jim responded with a quip, which made him laugh and pretty soon, we were laughing together, him telling us we need to bring our wives.

I told him if I brought anyone, it would be my boyfriend. I don't have a wife! At which point, Cyndy walked up with her friend, whose name I always forget (sorry), and we were off and hugging each other like old lovers.

It was pretty funny at the time.