I was in a total state of panic until I realized that I was in the hands of the gods or God or goddesses or fate, and that I should simply center myself and accept what is.

I was on board without a book. 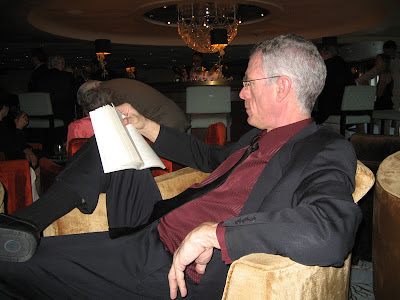 [Think Gene Wilder in "The Producers" without his blue blanket.]

In our rush to get to the ship, after packing at the very last minute, I realized I didn't have a book. I always have a book.

I remember now that I brought Jerry Robbins biography with me, but I just didn’t have the patience for a non-narrative “His father was born in Russia in 18-bla bla” stuff. I'm sure I'll read it, but it'll feel like a task.

I needed escape. I felt like I needed to enter into someone else’s world and headspace and culture and just live there. Novels so do it for me.
[Songs do it for me, too. And when I write a song, I realize that that’s what I’m asking of people, to allow themselves to live in the world of this song.

It’s an intrusion and it’s one I have learned to respect because even though I will always jump at the chance to sing for people, I don’t want to obligate someone to sit there and endure it if they don’t like it.]

I go to the ship's passenger library and scan all the latest titles.

Nothing. All checked out or gone or boring or by Shawn Hannity or Ann Coulter.

So, I go to my favorite place: The “bring a book / leave a book” table.

A very tattered and discolored copy of “Memoirs of a Geisha" with 50 cents marked on it in Magic Marker. A garage sale edition?

What I like about Library Roulette is that I probably might never have picked it up otherwise. I had a curiosity about it, but not enough to actually buy it.

Also, I heard the movie wasn’t that good. Whenever that’s the case, I’d rather read the book first and then see the movie so the story isn’t spoiled.

I immersed myself into the world of the geisha... couldn't put it down. Ate it up in, like, two days.

[My review: The story wasn’t that compelling, but the immersion into that world of the geisha and the culture of Japan was great. It was a good read.]

[An unbelievably adorable Eastern European wait person -- olive colored eyes set off by jet black hair -- just asked if there was something he could do for me. I asked for hot water for my green tea.

His said his name is Marco that and he’s from Bosnia.

This is his first time working on this side of the American continent. He previously worked for Carnival in the Caribbean and we shared a laugh over the image of tourist season there where “the ships crowd the tiny islands like ants around a piece of meat.”]

My second book was "Devil in the White City" which is a historical book structured like a novel, but all completely factual. It's about the great and forgotten Chicago World's Fair of 1892, and the fact that a serial killer had built a "Sweeney Todd"-like hotel next to it and killed multitudes of young women.

This is one of those books so packed with great historical information, you run around telling everyone every last detail. At the time, this Fair, which was a small city built in the marshes of Chicago, was considered to be on the same level of importance as the Civil War.

Next was a cop pulp novel. I forgot the name of it. There are so many of them out there. They all blend into the same. He was an old cop who breaks the rules and lives in Los Angeles. Echo Park. That's it. I swallowed that one whole in a day and a half.

The last book, which I will exit the ship with, is a murder thriller that takes place during the English Reformation. Not unlike "Name of the Rose" in its set-up, it's a much lighter fare, but it's only available in England. So, I like having contraband to read. It's called "Dissolution."

So, geishas, the Chicago world's fair, serial killers, cops in L.A. and monks in the 1500s. The real vacation I took over the holidays was in my head.
at January 05, 2008

Agree with you on "Geisha." Very interesting, compelling book.

I just got "Inside Inside," James Lipton's book about Inside the Actors Studio, for Christmas and I'm loving it. I'm reading it slowly because he's terribly pompous and pedantic (not surprising) and assumes you know a lot about the history of show biz, but it's absolutely packed with information. Jimmy would love it.

Already, barely into it, I've learned a LOT about Sanislavski and the development of "The Method" and why it was so innovative.

(Bet you didn't know that James Lipton was the voice of Dan Reid, the Lone Ranger's nephew, on radio. A job he held while in high school...his stories about the guy who played Tonto are priceless!)