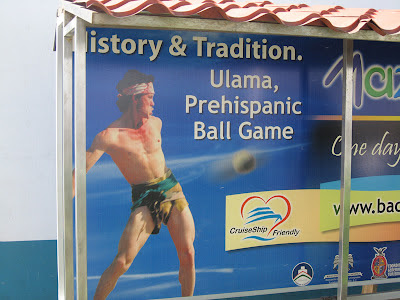 Does this sport look painful to you?
From my cruise diary.

Sometimes I have to unplug.

In an earlier time, that expression would have been utterly meaningless, but I have no doubt that sometimes even cave people felt overwhelmed with stress from their daily exertions and needed to clear their heads. But in this modern era where the little 11 year old girl at the Santa Claus arrival yesterday asked Santa for a cell phone--

[The ship’s rabbi just stopped by as I was writing that sentence sitting here in my breakfast nook I have dubbed The Office and asked me what I was doing. I told him I was having heavy thoughts. He asked me if they weighed at least 200 pounds.

He said it was too early to deal with heavy thoughts right now, too much of a time sink and I smiled at him and said that, to me, heavy thoughts are to be played with like a toy. Just for fun. His face brightened into a smile and he said, “Ah, now that’s a wise thought!”]

I am on a ship and have elected not to use their Internet connection. And it’s Christmas. And the 11 year old girl wanted a cell phone.

[Incidentally, two nights ago in the Christmas show (where Jim and I sang “Christmastime” from The Big Voice: God or Merman?), the rabbi did a comical routine featuring a Clement Moore-type poem, “The Night Before Hanukkah” featuring Sammy Claus. Okay, now back to the intended thread topic…]

[Did I just say thread topic? I’m starting to sound like Discussion Board. No. I'm not missing being Online. But I do love to get into flame wars. I don’t do it on purpose, but somehow I can’t resist putting my finger into the light socket. And I’m rambling because I could go down there to the dock and log in if I wanted to. Am I rambling again?]

Random: If you’re on a discussion board which consists mostly of one flame war after another and you’re tired of it, the solution is to implement the Bonus Round Flame War Tip: Never begin a sentence with the word “You,” The Corollary Rule is that it’s can’t be a rule. It has to be an agreement.

(Rules are greedy. They turn every discussion into a discussion about the rules.) 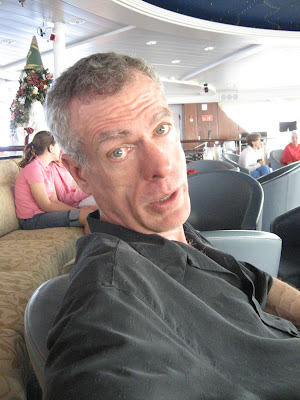 Steve at the Santa Claus Arrival.
It has now been four days.

I already know my inbox is overflowing, because all the email from my lists get piled in there every day, unfiltered. I don’t filter them because then I’d never open that folder. Better to let everything just pass through. But I’m testing myself to see how long I can stay completely offline.

(That’s what just blasted over the sound system. We’re in Acapulco, by the way.

Inches away from a cheap internet connection which I am not going to use.)

If I was going to go online, which I’m not, I would do it in a place like this because it’s too expensive to do it via the ship’s system.

It’s also good for me, creatively, to unplug. I have often wondered if I could get the same effect at home – like disconnecting completely for a week and living like a ghost, where nothing exists except Jim, food, the cats and the music.

The thought terrifies me.

No. This is fine. It’s Christmas.

Welcome home Steve and Jim. I really miss our breakfasts in the wonderful "office" spot in the Lido Cafe. Hope you guys had a wonderful cruise.