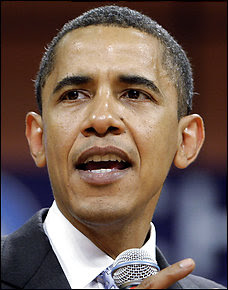 Putting aside, reader, whether you are liberal or conservative, Democrat or Republican, or even if you supported Hillary Clinton, the nomination of Barack Obama is an event that has stunned me and moved me beyond anything I can describe. It's historic in ways that make me so proud to live right now.

I can never claim to know what it feels like to be Black in this country, but I came face to face with racism when our family moved to the piney woods of east Texas when I was in the 10th grade.

I had actually grown up in Southern California when my family moved out West when I was five. Anaheim, in the mid-60s, was White. I don't recall that we ever even discussed race in America. Except once. It was in the bedroom I shared with my brother. Something must have happened to precipitate his action, but my dad came in and I remember he denounced racism in no uncertain terms. It was a moment that branded itself in my psyche.

So, when we moved to southeast Texas, a low income, rural, forgotten corner of backwoods America where integration had only recently been accomplished, I came face to face with my first real intimate friendships with African American persons and, frankly, I didn't think anything of it.

Not until the day I was called a nigger lover, anyway.

But things were already changing in the South. Even as the racism scared me -- and yes, I did see a KKK storefront a couple of town over -- it felt to me that the people of my generation were finally beginning to understand, identify and question their own bigotry -- even if in baby steps.

But it was real and it was pervasive and the word "nigger" was said a lot when it was just White people standing around talking. That's why the Barack Obama nomination has just astounded me. No matter whether he wins the election or not, or whether you support him or not, I think every American can take this moment in time and just celebrate that it's happened at all.

There will be plenty of time to chart Barack Obama's attempt to navigate a course between the exigencies of the old politics and the promise of the new, between yesterday and tomorrow, youth and experience, black and white. For now, take a moment to consider the mind-bending improbability of what just happened.

A young, black, first-term senator -- a man whose father was from Kenya, whose mother was from Kansas and whose name sounds as if it might have come from the roster of Guantanamo detainees -- has won a marathon of primaries and caucuses to become the presumptive presidential nominee of the Democratic Party. To reach this point, he had to do more than outduel the party's most powerful and resourceful political machine. He also had to defy, and ultimately defeat, 389 years of history.

It was in 1619 that the first Africans were brought in chains to these shores, landing in Jamestown. That first shipment of "servants" did not include any of Obama's ancestors; it's impossible to say whether some distant progenitor of his wife, Michelle, might have been present at that moment of original sin. Ever since -- through the War of Independence, the abolitionist movement, the Civil War, Reconstruction, Jim Crow, the great migration to Northern cities and the civil rights struggle -- race has been one of the great themes running through our nation's history.

I'm old enough to remember when Americans with skin the color of mine and Obama's had to fight -- and die -- for the right to participate as equals in the life of the nation we helped build. Watching Obama give his speech Tuesday night marking the end of the primary season and the beginning of the general election campaign, I thought back to a time when brave men and women, both black and white, put their lives on the line to ensure that African Americans had the right to vote, let alone run for office -- a time when Democrats in my home state of South Carolina were Dixiecrats, and when the notion that the Democratic Party would someday nominate a black man for president was utterly unimaginable.

Tiresome, isn't it? All this recounting of unpleasant history, I mean. Wouldn't it be great if we could all just move on? Bear with me, though, because this is how we get to the point where, as Obama's young supporters like to chant, "race doesn't matter." No one will be happier than I when we reach that promised land, and we've come so far that at times we can see it, just over the next hill. But we aren't there yet.

This is a passage from an e-mail I received in April from an Obama volunteer in Pennsylvania: "We've been called 'N-lovers,' Obama's been called the 'Anti-Christ,' our signs have been burned in the streets during a parade, our volunteers have been harassed physically, or with racial slurs -- it's been unreal."

Yet the amazing thing isn't that there were instances of overt, old-style racism during this campaign, it's that there were so few. The amazing thing is that so many Americans have been willing to accept -- or, indeed, reject -- Obama based on his qualifications and his ideas, not on his race. I'll never forget visiting Iowa in December and witnessing all-white crowds file into high school gymnasiums to take the measure of a black man -- and, ultimately, decide that he was someone who expressed their hopes and dreams.

When historians and political scientists write books about this extraordinary campaign season, surely they will seek to assess what impact Obama's race had on his prospects. But they will also devote volumes to exploring how he put together a fundraising apparatus that generated undreamed-of amounts of cash, and how his organization drew so many new voters into the process, and how his young supporters made use of social-networking Web sites such as Facebook and MySpace, and how his delegate-counting team managed to consistently outthink and outhustle everyone else. It will be written that Obama's nomination victory owes as much to adroit management as it does to stirring inspiration.

Will Americans take the final step and elect Obama as president? Should they? Is this first-term senator up to the job?

We'll find out soon enough. At the moment, to tell the truth, I don't care. Whether Obama wins or loses, history has been made this year. Maybe there's more to come, maybe not; but already -- after 389 long years -- it's safe to say that this nation will never be the same.

Email ThisBlogThis!Share to TwitterShare to FacebookShare to Pinterest
Labels: politics

We've come a long long way. This is indeed a significant moment in our history as a nation. As a Black American who loves this country in spite of all our racist past and present, I actually never dreamed this could or would happen in my lifetime. It's amazing and overwhelmingly wonderful.

no it's all about sexism, and mysogny! Or at least that's what someone I know says. I do not think this race could be boiled down to simply race and gender as if there was a black blob and a female blob campaigning.

Having said that, the media came up with some harsh stuff, but what do you expect from Fox.

Personally I was hoping for Obama. I pray he wins the election. It would be so amazing not only for the US, but for those of us who live in countries where interaction with the US is essential.