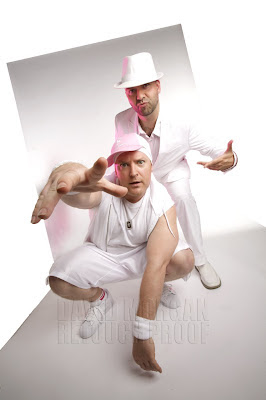 photo by david morgan
As part of our weekend back east, we were invited to the first prevue of a show opening in New York soon. It's a gay-themed rap opera imported from Canada featuring the two guys who wrote it. I wondered if Jim and I were young, if this is what we'd be writing.

I posted this review to All That Chat.

First of all, I am too old to really "get" rap music. It's not from my generation being that I'm 54, so I went to the first prevue of "Bash'd" prepared to resist it with all my being, though it won the 2008 GLAAD Media Award.

My worst fears were realized during the first five minutes because they were trying to get the audience to join in on some hand gesture -- I hate audience participation theatre -- and the fact that I was catching only about every fourth word.

But then, once the two engaging performer/writers settled in, the little prologue, I began to realize, was their way of getting us used to the delivery. They even promised us they were going to speak and sing as clearly as possible -- and to just give it a chance.

And, magically, after a few minutes, the cobwebs lifted from my old ears as the story telling began and I began understanding it more and more.

The plot is something we've seen in many gay musicals. Boy realizes he's gay. Family hates it. Boy runs to big city, meets another boy, they fall in love, face a tragedy and then...

Well, it's a bit Shakespearean in its plotline. I won't give it away, but the website does give away the fact that a gay bashing occurs. As a bit of agitprop, the piece works really well for several reasons.

First of all, it's very clever. I found myself laughing frequently and, during the emotional moments, found myself drawn in and even moved as I fell in love with the lovers. When tragedy happens, I became enraged at the injustice and felt, deeply, the anger they expressed -- something this form of music does very well.

Secondly, the piece also does itself a favor by being a one act that's only a hour long. It arrives quickly, tells the story quickly and then finishes on a dramatic note that also warns of the danger of overreacting to homophobic violence.

Jimmy even said he enjoyed the piece, though, like me, he is resistant to hip hop. I don't think either of us would have enjoyed a second act. It was a smart choice to give us a taste, tell us a compelling story told by these two very talented Canadians, and then let us go home to think about what we saw.

I have a feeling that young people will really enjoy it even more. I was happily surprised to find myself entertained and engaged. So, even for those who really hate rap and hip hop, but who like good storytelling and well performed theatre, I can recommend this. Just give it five minutes.

The only negative note is that, like much hip hop, it tends to find one rhythm/tempo and stay there. But the words were clear, clever and bawdy. I followed the story easily.

And I can't say enough about how well performed it was.