This is one of my adopted sons, Jason. He and his partner, whose name is also Jason just celebrated their 10th anniversary. They got married in their backyard. And Jim and I performed the ceremony under a tent with all their friends. (Jim got a minister license off the Internet. I played piano and sang. And no, we haven't started up a gay marriage business and yes, we did it because they asked us to and they are part of our family and we love them).

And it wasn't legal.

The cops didn't rush in, but there is a time in our nation's history when that would have happened.

There is a time in our nation's history when that little gathering of friends -- if it had happened at all, and it wouldn't have -- would have been raided by cops and the people hauled off to jail.

I want you to look at these renegade civilization killers:

They recently this year, they quietly celebrated their 10th.

That "time" that I mentioned when the cops would have raided us? It was during my lifetime -- and in many places of "civilization" on this globe, these people would not only be arrested, they'd be beaten. And the two Jasons would be hanged. 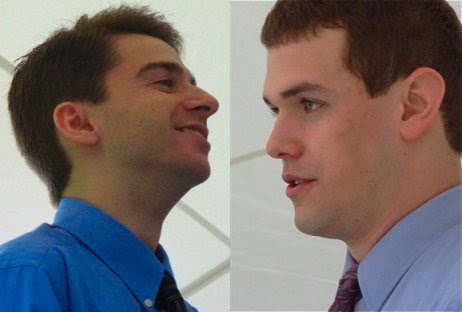 Watching Jason interact with Rachel is one of my greatest pleasures because someday Jason would like to be a daddy. And somewhere out there is a kid who really needs a daddy. And it would be one really well-loved kid.

But if the Jasons lived in my home state right now, that adoption would be illegal due to a recent popular vote.

And if they lived in Iran or Saudi Arabia, or in the America that used to be, they would be dead.

In the movie, MILK, which I urge every reader to see, it opens with actual newsreel footage of gay men being rounded up like criminals and hauled off to jail for doing nothing more than hanging out together.

That happened even in New York and San Francisco during my lifetime.

Hey, Jason! I just got a new idea for your web series. You and Rachel remaking "The Birdman of Alcatraz!"
at December 11, 2008