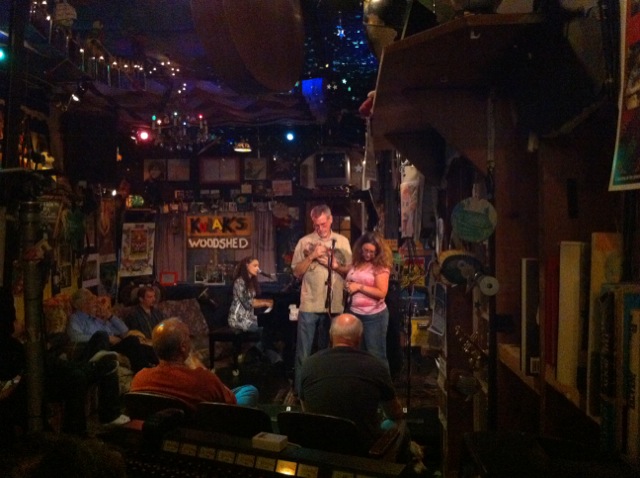 Michael Sugar took this photo of my last night with Kulak's (for now). That's my buddy and co-writer of the song, "Rescue," Val (Valerie Kuhns). I'm holding the rescue puppy which she recently adopted. That's Julie Chadwick on piano. We're singing one of Julie's songs, which she wrote when a beloved dog of hers died. It's called "They Say" and it's ACHINGLY beautiful.
When I began my set, I sang the original "Lazarus" from the Bonus Round Sessions CD. It's a song that I wrote shortly after I discovered I was going to live. I haven't sung that song in ages, but, alone in the apartment, I found myself singing over and over. In fact, it took me two days to remember the words.
I, then, said how much Kulak's has meant to me, especially in giving me two incredible gifts, the songs "He's Coming Back" and "Rescue," both emanating from the songwriter workshop I helped facilitate with Marc Platt. (I visited them a couple of nights, back, by the way. I think I'll get one of them to tell the story-- three  people I hadn't met.)
"He's Coming Back" came when Avril stood and told the story of her sending her son back to Iraq. And "Rescue" we wrote as a group, three women and I, for a previous Animal Night.
Sadly, Paul Kulak couldn't be there, so there was no video broadcast or recording. In a way, I'm kind of glad. Somehow, the fact that it was just us, the little family of regulars, and a number of listeners, made it feel more real.
I told them how much I believe in their music and how much we, as singers and musicians, must use our "powers" for good, to create peace and justice in the world.
"Connected" was how I ended the evening. I was crying the whole time. Partly because I felt sad to be leaving this amazing community of songwriters, but also because of all the memories I had been sifting through in packing up our things in the apartment right down the road.
So, now I'm home. Back in New York with Jim and Steinbeck. It's good to be home.
at August 29, 2010