The Lion of Songwriters Sleeps Tonight. 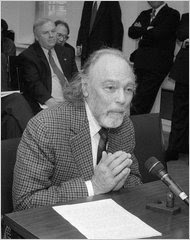 George David Weiss, who wrote a number of standards, including "The Lion Sleeps Tonight," (adapted from a Zulu song) has died. I knew him from having met him a few times through National Academy of Songwriters. George was the President of the Songwriters Guild until 2000. So, usually we were discussing copyright issues or other industry stuff. Since he was based in NY while I was in LA, we didn't meet that often.

But, once, we were tapped to do a songwriter presentation at some meeting. He did his thing -- "Lion," plus "What A Wonderful World" and Elvis' "Can't Help Falling In Love," -- and when it was my turn, since I didn't have any hits, I sat down and sang my first song (included in "The Big Voice"), "I Want To Make Music."

He came up to me and said, "I have to tell you. That's the first time I've heard death into a pop song and make it work."

He was a tireless advocate for songwriters. So long, George. Sleep tonight.
at August 24, 2010

Sweet of you to put me on there!