Scottsboro Boys is a Storytelling Triumph.

Why, it's just a hat and cane show, isn't it? The kind that is usually built on corny jokes and silly routines? Isn't rock supposed to be more honest than Vaudeville?

Thrilling, exhilarating, scary, uncomfortable, innovative, with not a wasted moment on stage, Scottsboro Boys is the kind of incisive and uncomfortable storytelling that leaves all the "entertainments" that have been passing for musicals behind in the dust. 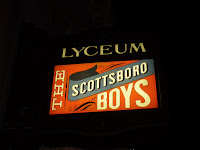 This is how you tell a story.

Toward the end, there's a costume change that I read as a big F-U to the society that pretends to care about justice, but who is really just wanting another diversion until the next one comes along.

Kander and Ebb have never shied away from exposing hypocrisy and shame in our culture, and they don't shy away here.

You also won't see better performances, nor hear better singing. What a cast!! It's hard to know who to single out, because each performer has his moment to shine -- and just the SOUND of those voices when they harmonize sent shivers all up and down my spine, especially in songs like "Commencing in Chattanooga" where the simple pile of chairs has now been assembled into a train. The joy in their voices as these nine men, who had never met before, were feeling free, and on the road to a better life.

(They were wrongly accused of gang rape by two white women, who didn't want to go to jail for freeloading the train ride.)

Particularly bone-chilling is a hymn to Alabama, sung in the jail cell, that lays waste to every plantation song ever written. You really don't know whether to applaud or not, and that's not because of any fault of the staging. But, the whole story is just so tragic. And yet, here we laughing at it!

Two trial scenes bristle with sharp-edged sarcasm and anger. All of it in ragtime!

This is not a happy minstrel show. This is bone-rattling, nerve-twisting reality that smiles at you while twisting the knife in your gut. And they manage to do it over and over again, all through the piece, until you're left shattered.

Every song has a steely surprise and every scene subverts its show biz trappings. A hat and cane show, dancing and singing with leather electric chair hoods over their heads. It's the kind of thing you imagine Sondheim doing in that you get no quarter (though, of course, Kander and Ebb have been doing this almost from the beginning.)  No chance to just be entertained.

Neither does it merely skewer the easy target country rednecks who ruined these "boys" -- one was 12 -- lives, but also a liberal establishment where the fight for justice for them was little more than the fashionable and tabloid thing to do, forgotten as easily as last year's runway offerings in Paris.

I'm going to be thinking about this show for a very long time. It seems to be about the Scottsboro Boys. But, really, it's about us and what we are, and, maybe what we always have been.

The question is whether we have the courage to look into that musical mirror. 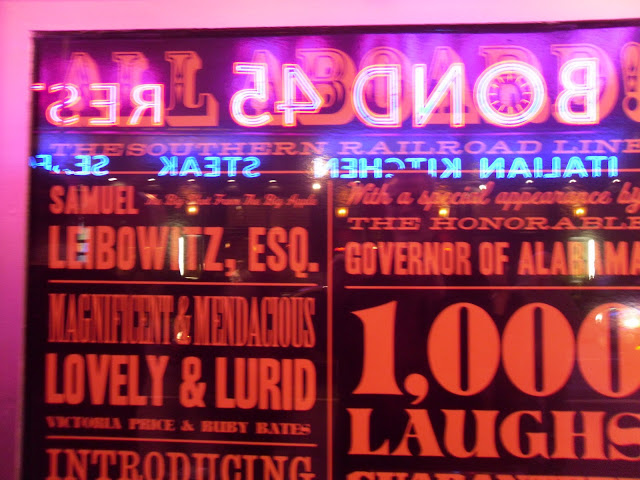