A Walk Around Times Square. 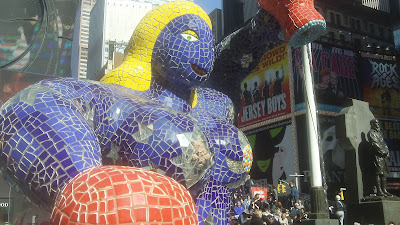 As winter begins to release its icy grip on New York, these days of suddenly perfect weather -- a cold day, but no wind and a hot sun -- just kind of pop out of  nowhere. So, we decided to pay a visit to Sardi's to say hi to Max and gang, find out what's up and see what the Center of the Universe* looks like. 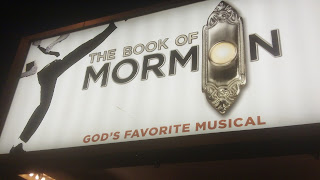 It started the night before when we went to see a new musical call "The Book of Mormon." It's written by the guys who created South Park, and it's the funniest two hours I've spent in a theater in a long time.

And I was sitting next to Allan Rickman, but I did not disturb him or say anything to him because the only thing I could think of what how much I love the liquidy nature of his voice. And as good as his Snape is in the Harry Potter movies, my geeky heart loved him first as Doctor Lazarus in blessedly overlooked movie, Galaxy Quest. (Blessedly because it's not over-exposed. When it unexpectedly pops on, I stop everything and watch it to the end. He's a world-weary actor dressed up as a reptilian alien -- and he hates it because he's really a Shakespearean actor).

Turns out Rickman really is a Shakespearean actor and director. But, frankly, I wasn't paying attention to him. I was too busy gasping at the perfection of the comic writing and the side-splitting performance of Josh Gad as a the zhlubby side-kick who becomes the hero by fumfering his way through a ghastly sermon he's trying to deliver to a group of African villagers, though we know his character has never actually read The Book of Mormon.

Joseph Smith is accompanied by hobbits, Star Wars characters, I think I saw Uhuru in the crowd of actors in costumes that pop up onto set in a haze of light and smoke -- along with a very unique cure for AIDS, which is so uproariously, outrageously and intentionally over-the-top vulgar that to describe would be to spoil it, even if I could put it into words that wouldn't give my mother a heart attack.

If you've seen a South Park movie or TV show, you know exactly what I mean. The question of whether that same absurdist cultural satire will work in a medium where satire closes on Saturday night is what the marketers and producers will be pulling their hair out over as the show moves toward opening night.

I wrote on Facebook that, after observing the videos on the site's website how free they feel now that they're in an uncensored medium, I wondered if they would prepare a PG-13 version for the road. Call it the Network Version or something.

But the show isn't merely cultural satire. It actually has a throbbing heart beneath all the hilarious rage.

Another aspect of this show that notable is that, for show that has such unconventional elements, the structure itself is right out of Rodgers and Hammerstein. It has a plot, believable characters who learn lessons, and even a show within a show in the second act a la The King and I.

If you're the kind that likes to see everything before the crowds start pressing in, this thing will open soon and it's already the hottest ticket in town. 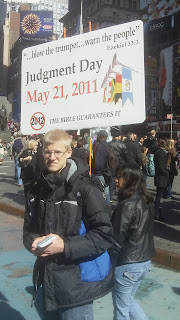 I couldn't help myself. I had to go back to the doomsday guys.

I look at that sad face and wonder, who is his kid and who told him to stand there with that sign? Does he really believe this?

I did a little research and discovered that it's some radio preacher behind all this. His website is on the other side of this sign; I refuse to give him any advertising. But I do have to ask whether this is the wisest way to get donations? I understand he had declared that "the Bible guaranteed" an earlier date, which turned out not to be the case since this sad creature is still here to advertise the next day that Jesus is coming.

Maybe it got Reverend Righteous a lot new listeners and more cash. Maybe he's trying to get up enough publicity to get his own reality show on some weird Christian cable version of Bravo. He and Fred Phelps can have the Doomsday Hour. Glenn Beck could host. Ah, but Network did it all back in the 70s.

So many lost souls.