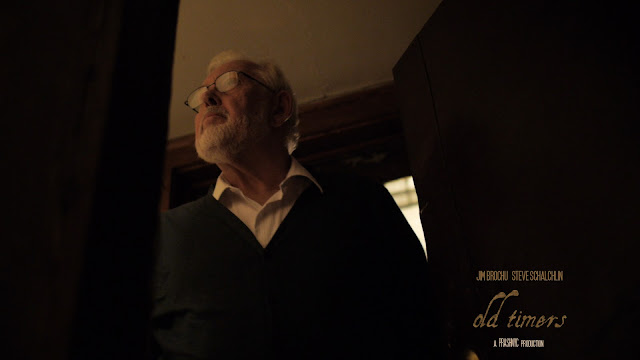 My "adopted" sons, the Jasons, who have made many appearances in this blog, including the one where Jimmy served as officiator of their wedding, were in town today. Both are extremely tech savvy, one helping to set up the new Cornell University tech campus coming to Manhattan (to be built on Roosevelt Island).

They went with me to Brooklyn to the Flux Fest, where Jimmy and I were starring in a movie (called "Old Timers") in competition, all based on time travel premises, plus other "prompts" that they picked out of a box. Prompts such as "white" or "mentor" or "revenge," etc. These prompts became the jumping off points for the films, most of which looked and sounded as professional as any feature film. Some even used special effects to great advantage.

Our movie, "Old Timers," is about two old friends who live next door to each other, and, having long ago found a time machine, decided to never use it because it got them into serious trouble once, where one of them was almost killed. Trouble happens when one of them doesn't quite fulfill the "don't use the time machine" mandate.

When it played last night, the audience laughed uproariously. They laughed at each prank and got every joke. And Jim was so gooood. Even I wasn't so bad. (Megan Stein and Carl Conway Maguire managed to edit out all my hammy moments. Thanks guys!)

People kept coming up to me at intermission and were so impressed that I was a movie star!

Ah, the riches and vanities of living in the bonus round.

Tragically, we didn't win any of the awards, but we did make an excellent short film together. I'm hoping they'll stream it soon.
at July 29, 2013