The speaker who most changed my life since #WDS2013 was an adorable Chinese man named Jia Jiang.


(EDIT: HIS REAL SPEECH FROM WDS IS BELOW, REPLACING THE TED TALK I HAD POSTED EARLIER.) 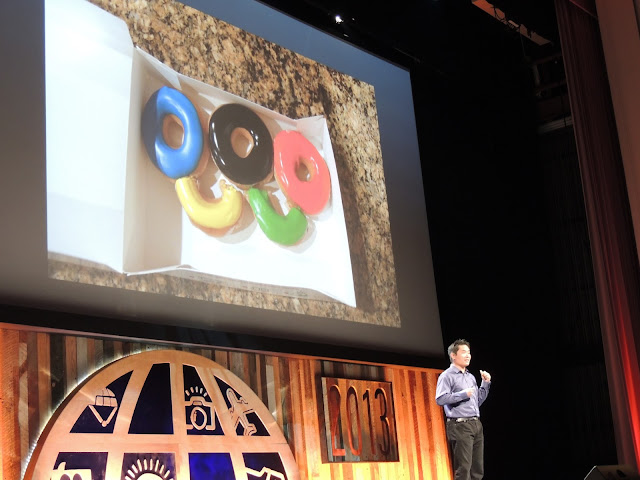 The first thing he said, after taking the stage, was, "I love rejection!" Then, he told us his story about coming from China to Houston (because of the Houston Rockets).

He found something online called "Rejection therapy," where the point was to go out and try to get rejected. In his case, he decided to spend 100 days trying to get rejected. At first, he was did get rejected a few times, but then, as he persisted, he started to get more and more people accepting his crazy requests -- driving a police car, playing soccer in a stranger's backyard, etc.

Here is his speech (now updated):

I have always been a bit of a coward when it comes to asking people for things. Maybe it's because I'm from a small town or because I'm actually kind of shy, but suddenly, I have found myself charged with this new energy when I want to ask for something.

To go looking FOR rejection gives your body a different posture. People start wanting to help.

And the fear of being rejected starts going away. As Jia put it, no matter who you are, or how rich you are, or how successful, rejection is a part of life. It never goes away.

Best of all, though, that fear I always had in my gut when I approached strangers -- a constant in my life -- has completely evaporated.

Right now, I'm at a music conference in Tennessee where I'm surrounded by strangers. From day one, I found myself thrusting my hand out and just saying, "Hello! I'm Steve!" Before, I would have been too shy for such a thing. I can't even tell you why. It's just true.

And people here have sometimes grinned and shook my hand. Some turned away, thinking I was some kind of aggressive nut, but my fear of rejection is gone. Absolutely and irrevocably gone.

Why? Because instead of entering into a situation afraid of rejection, I go looking for it. And when I succeed in being rejected, it becomes this weird kind of victory rather than a sting of defeat. Yeah, it's just a trick of the mind, but it totally has worked for me.

He divided his life into "Before Donuts" and "After Donuts." Mine is now "Before Jia" and "After Jia."

So, reader, look at Jia's speech above if that sentence made no sense and let it inspire you. Go get rejected!

It will change your life.