Since the prizes are better in the bonus round, I always look for ways to bring something unexpected or extra any time I make an appearance. When Chris said it was in Portland, Oregon I immediately thought of my old L.A. friend, David Peterson, with whom I've sung, who's now with the Portland Gay Men's Chorus and I asked him if the chorus would sing with me. He asked me what I was singing for.

I said I wasn't sure what it was. But that it looked like a nice event. (At the time, I hadn't read that much about it). It was definitely not promoting some cult or religion. It's just people.

He said that they would have finished a long season and would be on break, but that he thought he could gather a group who were fast readers. I gave them two pieces: The background choral arrangement of "When You Care" (by Alan Satchwell) that you hear on the CDs and in the show -- with a big soprano part that was no problem for them. And a new arrangement of "Lazarus Come Out," which I had put together quickly, since I usually just improvise it with audiences.

We had one rehearsal to get it right. And I am terrible at this work. Teaching someone a part. My brain doesn't compute like a musical director. I can't hear a bunch of sounds and know which one is wrong. So, as I sat there fumfering at the piano, David rescued me. So did the choir. They made suggestions I immediately adopted and it felt like a real collaboration.

My set list was now rock solid in my mind. Connected, then Somebody's Friend. Then Lazarus, with chorus followed by When You Care.

Somehow I knew why Somebody's Friend had to be in there. Because the other three songs are inspirational and uplifting. Which is nice, but we need to know uplifting from what? Unless, we as a group, go into hell together, we're not escaping anything. We're not lifted from anywhere.


At the first staged reading of The Last Session, at the Hollywood Roosevelt Hotel, the room had a weird L-shaped configuration, which meant that audiences were on two sides of the stage. So, it was on the smaller L side that we hid the choir from a Methodist church in the Valley. When we reached the end of the piece, where Buddy whips out his cassette and runs it to the booth, the choir suddenly started singing. And in that room, it was so rich, because it was real voices in the room.

The next time was one I had forgotten about. The National Academy of Songwriters allowed me a place on their annual all-star line-up of The Salute to the American Songwriter concert. I found it after digging around in the old diary. And on that show, I had the choir hidden behind a curtain. I sang "When You Care," surprising the audience in the middle of the song after the first chorus.
That's it! I'll bring the Gay Men's Chorus on DURING Lazarus Come Out! Genius!

I wasn't nervous about the singing or playing itself. I know how to sing and play. I've sung in concert halls and night clubs, Broadway stages and street corners, churches and synagogues. All the same to me.

I was puzzling over the idea that the point of the presentation was "Living in the Bonus Round." What does that mean? How do I take the last 20 years and put them into 20 minutes, while also singing four songs?

What's "Living in the Bonus Round?" I don't know. They are words that came out of my head when I was trying to describe how I felt to have a new life. Like a game show. In the bonus round, time speeds up and the prizes are better.

I don't run around with a set "program." My theoretical TED Talk hasn't been written out and timed down to the last minute. (But I should think one up, just for the heck of it.)

Let the songs tell the story.

However, what I did do was write up an intro for Chris, that set my story up, including the fact that the last time I was in Portland, I was staggering around on the "last cruise of my life" but that, miraculously, I had survived. Even threw in "And he's with us tonight!" 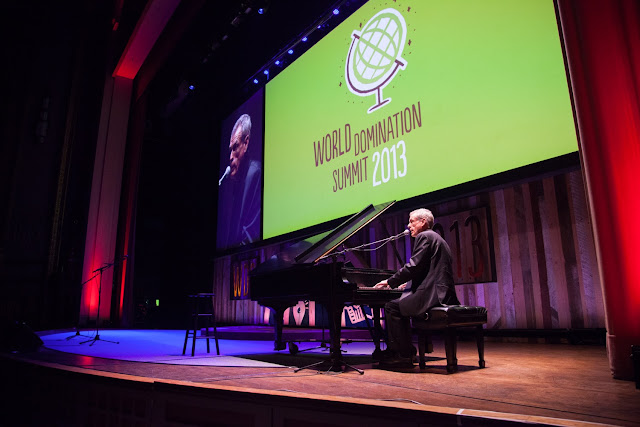 I have no memory of the performance, but when it was over, all 3000 people leaped to their feet in the most spontaneously enthusiastic ovation of my life. I was dazed and stunned.

And in my element. Time for Somebody's Friend. Will they be able to take it? Or will it be like at 54 Below, the week before, when I plunged everyone into a depression.

I went for it.

I knew I was safe within seconds, though, because I started hearing laughter. They were getting the joke. Yes, Somebody's Friend is intense, but it's also funny, steeped thoroughly in the kind of black humor suffering people use to survive.

At the end of the song, another spontaneous standing ovation. Hey! I like this crowd.

Time to start "Lazarus Come Out," a song from New World Waking, with lyrics by Peter J. Carman. A thank you song to the ones who stuck it out with us at our lowest, who brought us back to life by their refusal to let us go.

I got halfway through the song and, "Ladies and gentlemen, welcome a select group of singers from the Portland Gay Men's Chorus." And the guys, all dressed in black, streamed onto the stage to great applause -- at which point we started the second verse. And we sounded spectacular.

We got to the second chorus and I said to the crowd, "Sing along!!" They sang. And I don't remember the rest. All of it is an out of body experience.

After it was over, another standing ovation. I could really get used to this. My emotions were dialed up to HIGH OVERLOAD.

I continued, "You don't have to care. No one in here has to do anything."

But when you do, that's when the world starts changing. And I started to sing the words I wrote with John Bettis:

EPILOGUE:
After I finished the concert, I went backstage and saw Chris Guillebeau sitting alone. I asked him, finally, "Chris. I really want to know. How DID you find me?"

He said, simply, "I saw you 10 years ago in Memphis and I knew you'd be perfect." And then he went back to whatever he was working on, preparing for the end of the program.

I had no memory. I went back into the diary and saw that there was very little there. 1998, I think. Which means it was probably a college AIDS education concert. It was in the pre-laptop days. Before I even had a functional camera. So, no photographs. Just a quick note that was copied from a discussion board, about how it was a very small venue where I had to use duct tape to keep the microphone stand together.

And that's how things happen.

We never know who's reading us, listening to us or singing with us. Each one of those people will take away something that you can never guess. I'm thinking that the gig was so small, it made no impression on me at all except for the fact that it was there I met Hoover the Pot Bellied Pig who used to roll over and shiver whenever her "mom" put my music on the stereo.

Which is a whole 'nother Tale From The Bonus Round.

I will only know if I was successful by what happens next, by what the heroes in that audience in Portland do with the information, guidance, mentoring and inspiration that came from the stage of the World Domination Summit. If I light just one little fire, then the whole world can, indeed, be saved.