Goodbye to the Great Figaro. 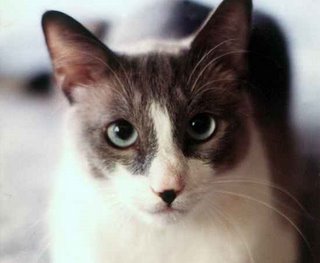 RIP FIGARO
It is with great sadness in my heart that I must announce the passing of one of the great cat voices of our generation. Sadly, his great works will probably not see the light of day. I know he was preparing an epic musical called MASSACHUSETTS (where he was looking for "actors who can dance and dancers who can spell") and a new waffle, but when you're a cat, you sleep most of the day, and there just never seems to be enough time.

Figaro's daddy, my friend Michael, had never intended to own a cat. But, 20 years ago, when the Shelter had a cat adoption day, and Michael was passing through, Figaro immediately nailed him with his cat stare, declared him "pwned" and that was it.

Word has it that they slept together every single night, and I personally witnessed Figaro licking and biting Michael's nose, though I would never spread rumors, of course.

Happily, though, Figaro did leave us a blog where fellow cat Jett was allowed a word or two. But it was Figaro's innate cat intelligence that dominates the blog.

I am going to miss Figaro a lot. I know Michael is heartbroken. We still miss Thurber. And we also still miss Old Howard Katz who passed a number of years ago.

So, here's to you, Great Figaro. You brought untold hours of happiness into the life of one of my best friends in the world. And for that alone, I will always love you and remember you.

Email ThisBlogThis!Share to TwitterShare to FacebookShare to Pinterest
Labels: cats, In Memory