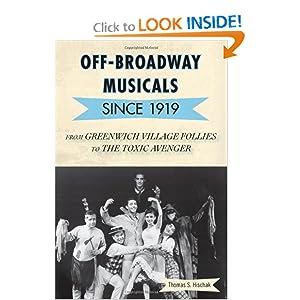 Jim was surfing around the other day and discovered a new book covering the history of Off-Broadway in New York.

It's called "Off-Broadway Musicals since 1919 from GREENWICH VILLAGE FOLLIES to THE TOXIC AVENGER" by Thomas S. Hischak.


Naturally, we had to look up The Last Session and, along with a history and synopsis of the show, they Hischak said this:

Of the various musicals about the AIDS epidemic that surfaced in the 1990s, this one may not have gotten much attention but many consider it one of the best.

The songs by Schalchlin were incisive, potent, and avoided sentimentality, the driving rock music keeping any of them from becoming maudlin laments or angry diatribes. Gideon argued “At Least I Know What’s Killing Me,” Tryshia praised “The Singer and the Song,” Buddy offered the ballad “Going It Alone,” and Gideon and his friends reflected on AIDS support groups in “The Group.” Perhaps the most disturbing number was “Somebody’s Friend” about all the false rumors circulating about a cure for the disease. Musicals about AIDS do not do well outside of large cities, and The Last Session was no exception. Yet the quality of the score is unmistakable.

Wow! What a great write-up.

One thing, though. TLS may not have had a large NUMBER of productions "outside of large cities," but in nearly every single smaller theater where it has appeared -- Norwich, Omaha, Rochester, NY, etc. -- it was not only a smash, but reports came back that it became the most beloved and popular show they'd ever produced.

No brag, just fact. Omaha extended it and revived it, garnering 10 awards. Rochester has done it several times, and the Spirit of Broadway Theater is bringing it back after having only produced it a couple of years ago.

It's producers who assume, because it is about AIDS, that end up rejecting the piece. But when they do produce it, the results are spectacular.  This has happened everywhere it's ever played.

Email ThisBlogThis!Share to TwitterShare to FacebookShare to Pinterest
Labels: The Last Session

Excellent assessment. The only ones who missed out were the ones that didn't give the show a chance, and they are at a loss for it. Proud to have seen the show in NY. The songs still make me laugh, make me cry and make me think.

Wonderful write up! Its good to see the show recognized as it should be. :-)

What's that about your potent incisor? Was this a vampire show? JK!! Not mentioned (sadly you didn't get to see it), but the production in Richmond, VA was one of my favorites. Even though I've seen TLS over a dozen times, I'm ready for another revival!

Oh that's a really cool book! Thanks for reminding me!