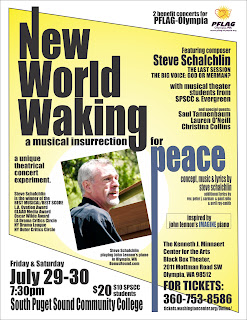 Oddly (or not), I don't obsess over music. I don't sit over a keyboard for hours and hours. I don't set a time every day where I will write only music or songs. I know people who do, and I envy that kind of concentration, but, for me, the writing of the song never stops. No matter where I am or what I'm doing, the writing never stops.

This next Sunday I will be going into the studio to finish up "Rescue." Peter Link and I are still searching for the exact right sound for the album. I've been orchestrating, over-orchestrating, stripping everything down to the bone and back again.

Right now, there's a temp vocal track. It's one I cut during the time I had the kidney stone. I think that particular Sunday, it had just passed but I was still very weak and in a lot of pain. Maybe we should keep it.

The next song is going to be "Every Day A New Amen."

I had a long talk -- by phone! -- with my dear friend, D. Whitney Quinn, who is, for me, one of the greatest songwriters on this planet. But you've probably never heard of him because he isn't 19, pretty and on a reality show.

Whitney and I bonded at Kulak's Woodshed, where I was the volunteer camera guy and he was the quiet, somewhat fragile looking person who sat meekly at the piano and then tore your guts out as he chain-sawed through family pain, existential pain, my pain, your pain, and did it with a wicked little half-grin letting you know this shit hurts but it ain't gonna defeat me.

Since Whitney more or less thinks the same about me -- and he has said so on many occasions; usually we're trying to out-compliment each other. (Your turn, Whitey!) -- it feels great to just talk music with him.

But that conversation reminded me that while a musician can live a life hunched over an instrument, a songwriter has to be out in the world, listening, trying, crying.

He said, "You've been singing a lot in churches."

I said, "It was to my great surprise that the songs from my three theater pieces can also be sung in churches." Then I told him how, by volunteering at Christ Church Bay Ridge, I now have a professional choir filled with young opera and musical theater singers and world class musical director, Mark Janas. So that has led me to singing in church a lot, which love to do.

We were discussing the current sad state of affairs with regards to music because now it's all about selling out for money. Music used to be our salvation. Now it's a get rich quick scheme, where the younger you are, and more aggressive your parents are, you can become a teen sensation for a few minutes.

The emptiness of the relentless culture -- like a person dying of thirst at sea -- can be depressing, but for an artist who actually believes in the music, like Adele, it's a land of opportunity. It may seem like the corporate monopoly is in full force, but with YouTube, anyone can be found.

And I believe in my my music. As fragile as my body may sometimes be, music still comes out. And it's thrilling for me to know that next month, I'll be heading back to Olympia to work with college students. I haven't done this in years.

And that's why "The Movable Feast," title of the blog entry.

Because I'm now going to extend the experiment of "New World Waking," which, as a performance piece, is a modular, flexible piece of theater. I've sung it solo. I've sung it with actors. I've heard it with choirs. And now we're going to do it with students.

After the great success of trying the "modular" theory here in New York -- i.e. rehearse each cast member individually and then hear it all together, for the first time, along with the audience, thus giving everyone an "opening night" experience, where both audience and cast essentially are one because the cast becomes part of the audience and, with the sing-alongs at the end, the audience becomes the cast -- I thought it might be fun to try it with college students.

When Gabi and Alec contacted me about singing a concert in Olympia next month, and told me I'd be doing workshops with theater students there, it hit me that instead just talking about theater, we could create a theater piece ourselves. Then they can go through the process and see how shows get put together.

What gives all of this resonance, of course, is the fact that it was in Olympia that I encountered John Lennon's Imagine Piano -- I remember the reporter to sidled up to me, asking me I felt his "energy" or "anything" in the piano when I played it. And I remember laughing to myself at how much John Lennon would have hated the thought of anyone turning it into some kind of supernatural shrine.

But something was born that day. A song cycle called "New World Waking."

If I can engage the students right from the start, maybe even video our work, or find some aspiring filmmaker student who wants to make a film, we could share this with the world.

But that won't be the point of it. The point will be to sing the songs and create a moment.

Church. Theater. If you're singing or telling truth, it doesn't matter if it's church, theater, a cabaret or the corner bar.

We'll create something unique and meaningful and passionate.

And then we'll do it again the next night. All for PFLAG. All for Bill Clayton.

We're also going to be doing it again here in New York very soon. No exact dates yet. No performers to announce. But it is going to happen.