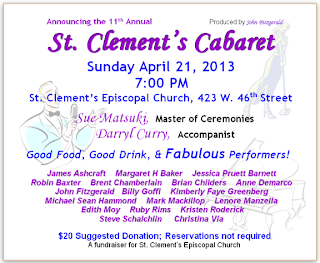 A yearly event held in the recreation hall for the St. Clement's food program. Hosted by the wonderful Sue Matsuki, Steve Schalchlin will be singing a couple of songs along with many wonderful New York singers and performers from the world of clubs, cabaret and theater.

A benefit concert for Zani's Furry Friends, a group that rescues pets bound for termination, and finds them homes. Jim Brochu and Steve Schalchlin will be appearing along with many great stars of theater and cabaret. Hosted by Sarah Rice, who originated the role of the wife in Sweeney Todd.

Steve Schalchlin, along with members of the Portland Gay Men's Chorus, will present a 15-minute performance for the summit. Created by author Chris Gillebeau, this is a gathering of Internet entrepeneurs, dreamers, adventurers and doers. Sold out.