I got a note from Bev this morning, who lives in Davis California.

So Walt walks out to the driveway to pick up the paper this morning.
He's halfway bent over, reaching for it, and the attached is what he
sees, staring up at him. 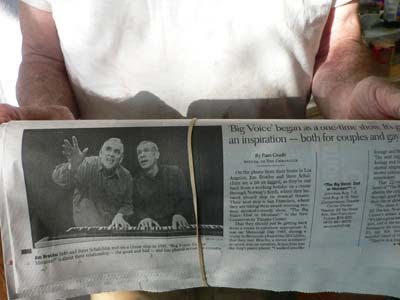 Naturally, I quickly went online and found the well-written article by Pam Grady.

"The show is very inspirational," says Ed Decker, New Conservatory Theatre Center's artistic and executive director. "It's just a great testimony to the power of love, and at the same time, this amazing homage to the temple of musical theater. It's just this interesting, fascinating, heartfelt blend of those things.

"They're in a long-term, gay relationship, which is a very big part of the gay civil rights movement right now. They've been together for years and years and years, but they're not able to tie the knot the way everybody else is able to do."

That the show catches the zeitgeist of the gay-marriage debate is a happy accident. "The Big Voice" began as a one-night-only performance when the Laguna Playhouse asked the pair to participate in a solo concert series, an informal performance that would celebrate their musical "The Last Session," which had been an award-winning hit on the Laguna stage during the 1998-99 season.

"I panicked, because I'm not a good improviser, so I sat down and actually wrote this musical, which had been in the back of our minds about growing up in different religions, but yet finding truth in the temple of musical comedy," recalls Brochu, a former San Francisco resident.

On the night of the performance, the response was tremendous; in the first act alone, all the laughs added 12 minutes to the show. That was Aug. 12, 2002. One month later, they began workshopping the production, with new songs to replace those from "The Last Session," at Hollywood's Lex Theatre before moving to West Hollywood's Zephyr Theatre. A three-week run turned into a four-month engagement, followed by stops all around the country, including, most recently, a six-month run in New York.
...
"It gave us a chance to show what a gay marriage looks like to a lot of people in small towns and the Midwest who never really ... they saw gay marriage as this challenge to their world until they met two actual people and then they went, 'Oh, you guys are just like us,' " says the 53-year-old Schalchlin. "All of the sudden we humanized the issue, and I think that's the most beautiful part of it, what has been exaggerated as a political moral war really just comes down to two people who love each other. We show that."

Email ThisBlogThis!Share to TwitterShare to FacebookShare to Pinterest
Labels: Big Voice in SF