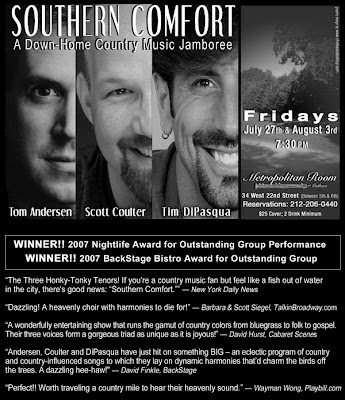 For readers in New York, I want recommend a show I've heard a lot about featuring a singer who I think has one of the most magnificent tenor voices I've ever heard. His name is Scott Coulter and though he's well known in the New York area on the cabaret scene, I first heard him at the Broadway By The Year concert last month. When he stepped out onto the stage and that voice -- THAT VOICE -- filled the room, I thought I had died and gone to heaven.

It's unlike the typical Broadway voice. Instead, it has a delicate, reedy edge that is purely contemporary pop/country/folk, and as I sat there listening, I kept thinking, "Oh, man. This guy needs to sing my songs." I met him afterwards and, sure enough, he had seen The Last Session, knew all about it and was very enthused about getting some material. So, naturally, with the new show Amy Lynn and I are writing, I wrote him back and said that once we are ready for New York, I was going to camp out on his doorstep and not let him out of his apartment until he agreed to be a part of it.

In his email blast, Scott says, "If you missed us when we performed it last August, here's a chance to catch up. We're bringing the show to the Metropolitan Room on July 27th and August 3rd (both Fridays) at 7:30pm. Once again we'll be backed by a fantatstic country band featuring banjo, fiddle, mandolin and more. Plus, we're planning to record these shows, so we'd sure love to have you in the audience clapping up a storm. The cover is $25, and there's a 2 drink minimum. For reservations, call (212) 206-0440. We just had a blast, playing to packed houses at the Bradstan Country Hotel in the Catskills, and we want to do the same in Manhattan."